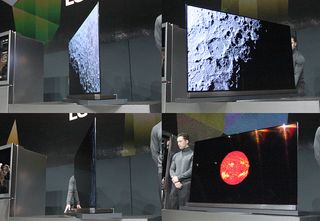 We were expecting, as is customary, something approaching an avalanche of new products from LG's CES press conference but instead it was sharply focused on TV, with a smattering of white goods for good measure.

This was in part due to the drip-feed of new LG products in the days and weeks before CES got started, but also simply because it seems there's not quite as much new product for the company to shout about this January. We could yet uncover much more when we get a chance to get to LG's CES stand on Wednesday.

For now, here are what look to be the key products and features to look out for from LG in 2016…

In recent years, and where OLED has been the picture technology, the focus has been on curved screens, but LG's press conference passed without so much of a mention of a curve. So for those of us not taken with curved screens - they're eye-catching but otherwise a bit unneccessary in our mind - it looks like flat OLED TVs will finally be a real proposition for 2016 and available on a decent range of sets. Over to you, Samsung...

Just when you thought you know where you were with 4K... LG annnoucnes it has a production-ready 8K TV in the offing. It will supposedly be in shops later this year. It's huge (98 inches), it will be expensive, and there won't be any content, but it's a nice headline in time for the biggest tech show on earth. And a reminder, should you need it, that the TV tech industry moves at a rapid rate. But for the rest of us, there's more realistic TV tech to be interested in...

...like HDR. High Dynamic Range became a trend towards the end of last year but we were short on details: what was the spec, where was the hardware, what content was available. It looks HDR 4K content will become the gold standard in 2016, with LG's Super UHD range (let's try and ignore that 'Super') and the company's standard OLED range sporting HDR compatibility. Alongside the news of the official Ultra HD Premium spec, which rubber stamps what's required for HDR 4K devices and content, it looks like HDR will be a spec worth ticking for the serious AV enthusiast in 2016. Dolby Vision support, effectively a variant on HDR technology, also appears on the company's OLED and Signature OLED TV ranges (which could confuse matters…).

LG isn't perhaps known for high-end products, despite the company's admirable willingness to be first with flagship TV tech, but the new LG Signature range will try and change that. Given the most air time at the LG press conference, the range will deliver high-end products across a broad spectrum of product categories. It's launching with a top of the range LG OLED TV, plus a fridge, oven, air purifier, dishwasher and washing machine. We said broad spectrum... The OLED TV is naturally the point of interest for us but we wouldn't be surprised to see Signature products arrive in other AV product categories. Which leads us on to our final point…

We're used to TVs dominating the AV landscape at CES, but there was almost nothing else at the LG press conference. The company's TV range delivered plenty to get excited about but it was something of a surprise to hear nothing of soundbars, headphones, wireless speakers, and the like. Audio was clearly not a priority. We heard about LG's new soundbars and wireless systems ahead of the show, so we guess they'll be tucked-away on the LG stand, but they weren't deemed worthy of repeat mention today. We'll be on the hunt for any more new LG AV products later in the week.