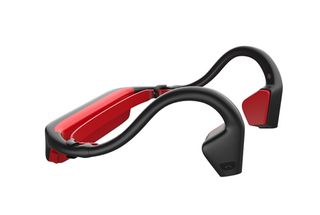 Damson's new Headbones wireless headphones have moved closer to becoming a commercial reality after the British company exceeded its £50,000 Kickstarter target with more than a week remaining.

We first caught sight of the "revolutionary" new product at CES 2014 in Las Vegas, with "global interest" in the headphones forcing Damson to bring forward its fundraising campaign by a few months.

In light of the success of other AV projects this year, Damson took to Kickstarter last month (June) to see if it could raise the £50,000 needed to take the Headbones into production by the end of the year.

Interest generated at CES seems to have paid off, with the current amount pledged standing at nearly £69,000 at the time of writing – and there's still more than week remaining.

Not aware of Headbones yet? Allow us to explain.

Headbones are a pair of wireless headphones that create sound by sending vibrations through to your temporal bone straight to the inner ear, which means that they won't block your ear canal.

This means you are able to listen to "top-quality audio" and keep in tune with the environment around you – something that could prove handy if you listen to music while out walking or cycling.

Incisor Diffusion Technology found in Damson's Twist and Jet wireless speakers has found its way into the headphones, which are compatible with any Bluetooth-enabled portable device.

The headphones can be charged using a Micro USB cable and Damson will launch two versions: one that sits in front of the ear and the other that rests the speaker just behind the ear.

Other AV successes on Kickstarter this year have included the Dash – the "world's first" smart wireless headphones from Munich-based Bragi and Neil Young's high-resolution PonoMusic player.