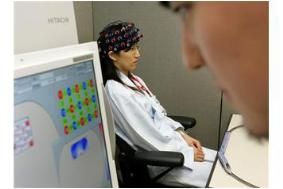 The so-called "brain-machine interface" analyses slight changes in the brain's blood flow and translates brain motion into electric signals, according to a report by the Associated Press.

Hitachi's brain-machine interface uses a technology called optical topography, which sends a small amount of infrared light through the brain's surface to map out changes in blood flow.

Although such technology has traditionally focused on medical uses, companies including Hitachi and Honda are keen to refine the technology for commercial applications.

Hitachi's scientists are working on a brain TV remote controller that would let users turn a TV on or off or switch channels by only thinking.

At least it would solve the perennial problem of losing the remote down the back of the sofa.