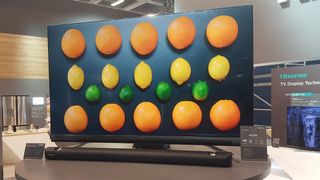 Hisense has taken IFA as an opportunity to showcase two ULED televisions it plans to release in 2019.

The 65U8A (above) is its high-end attraction, a 4K HDR set featuring an ultra-slim, bezel-less design and local dimming contrast. Its 55E8A, meanwhile, is another 4K HDR TV representing the mid-range.

Little information was available, other than Hisense having focused on bettering its reproduction of colour with these upcoming models.

The last models we reviewed from Hisense were its H50N6800 and 32M2600 sets in 2017, awarded three and four stars respectively, and our qualms then were largely to do with contrast and detail in darker colours.

If the Chinese company has indeed addressed those issues since then it could be a quite positive year.

Hisense has given a broad estimate for April or May next year to release the 55E8A, but a launch of the 65U8A could be some time after that, with no news yet on prices either.