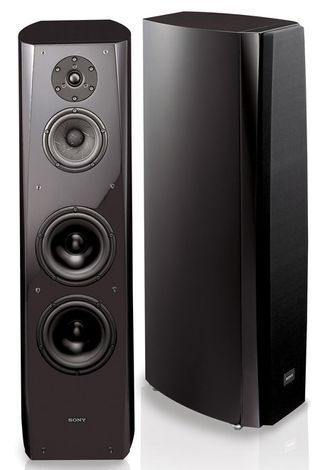 The Sony SS-AR1 loudspeakers – the company's no-compromise design, already on the receiving end of accolades in the USA – could be coming to the UK.

The floorstanding speakers, combining heavyweight birch and maple ply cabinets with high-quality drivers from Scanspeak, sell for $27,000 a pair in the States, where they've already been praised by critics and adopted by some high-end music companies.

Now Sony, back at the High End 2012 show after a lengthy absence, was using its presence to court German retailers with the speakers as part of a plan to sell the SS-AR1s more widely.

The company held an after-show presentation at Munich's swish city-centre Bayerischer Hof hotel – the kind of place where the serious celebrities stay, as evidenced by the makeshift Michael Jackson shrine around the base of a statue of composer Orlande de Lassus across the street on Promenadeplatz (pictured left by hifiwidow).

Here it explained and demonstrated the speakers to the visiting press, ahead of getting down to the serious business of selling the speakers to a small but select group of German specialist audio retailers the next day.

And the launch was clearly important: as well as Sony's European Technical Marketing Manager, Eric Kingdon, being on hand to talk us through the design and construction of the speakers, it was attended by senior Sony staff from both Europe and Japan.

These including the head of Sony's home audio/video company – in other words, the man in charge of all Sony's home entertainment technology, 'except TVs', as Kingdon said to some laughter in the room.

Anyway, the speakers – and the emphasis here is the design and build, and its parallels with the way musical instruments are put together.

The baffles, for example, are made from maple, harvested in Hokkaido, northern Japan, in November simply because that's when the grain structure is at the right density and 'tightness'.

This wood is then laminated to create a 5cm-thick ply.

The machining of these baffles, and the curved cabinets made from 32mm birch-ply to which they're fitted, is so precise that, as Kingdon (left) demonstrates, there's almost no need for the glue that's used in production to hold the two together.

That's down to furniture-grade craftsmanship in the Japanese cabinet-making factory where the enclosures are made.

In fact, there's a story that the Sony project-leader asked the factory to make a sample cabinet but leave the pieces unglued for inspection, but when he arrived he found a fully-assembled cabinet.

On expressing his surprise, he was answered with a tap or two of a rubber mallet on the enclosure by a workman.

At which point the cabinet came apart – as requested, it hadn't been glued, so it was ready for inspection.

The speaker is a four-driver, three-way design using a 25mm soft-dome tweeter with a ring of six neodymium magnets in its motor system, and a 13cm midrange driver using a cone that's sliced and re-glued to break up internal resonances.

These are in their own chamber, separated from the twin 20cm aluminium-cone woofers by a double-layer-plus-air-gap divider, while the cabinet itself sits not on conventional spikes, but a hefty metal base-plate and brass feet.

Why? Simply because it sounds better, say the Sony engineers.

Back at the show, Sony has a spacious corner room in one of the two airy atrium spaces, and is showing a variety of systems built around music and video.

One section highlights the Berlin Philharmonic subscription channel, available on its smart TVs, set-top boxes and Blu-ray products. On the screen, Sir Simon Rattle is conducting a semi-staged performance of Bach's St Matthew Passion, in Full HD and surround sound.

And over a cup of coffee, taking a break from running a 4K projector demonstration including a cliip from MIB3, Kingdon promises that the AR1 speakers are just the start of a bigger audio project.

The demonstration we heard was using a player and amplifier from 'AN Other' Japanese brand, but on the way is a new line-up of high-end electronics to match the speakers, alongside the usual launches of Blu-ray players, AV receivers and the like.

Looks like Sony might just be about to get its top-end mojo working again – after all, there's already a smaller speaker model, the SS-AR2, on the way…