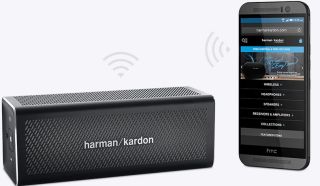 Harman Kardon and HTC have been working together and the Harman Kardon One Bluetooth speaker is the first product from the partnership.

The £129 wireless speaker, which is making its debut at MWC 2015 this week, works with any Bluetooth device to stream wireless music - but has a few neat touches up its sleeve if you connect with an HTC smartphone. Hence the 'One' name, in line with HTC's phone range.

The speaker, which stands just under 7cm tall and 18cm wide , has HTC Connect technology inside. This allows an HTC phone, such as the brand new HTC One M9, to connect using a simple swipe of three fingers from within any music app.

This means a simpler, quicker connection from any music app for HTC phone users and no more fiddling around in the settings menu.

We see no reason why you shouldn't use the One speaker with any other Bluetooth device but clearly it's aimed at HTC owners and it will presumably be pushed with HTC phones in telecom retail outlets (which is where it will be sold).

The speaker promises up to 5 hours of battery life, depending on usage, and will charge fully in 3 hours.

We've been told the speaker also incorporates Harman's multi-room wireless technology, as seen on the Harman-Kardon Omni wireless products, so you'll be able to connect and stream music around multiple speakers and rooms.

The Harman Kardon One will be on sale from the end of March 2015, with a recommended retail price of £129.