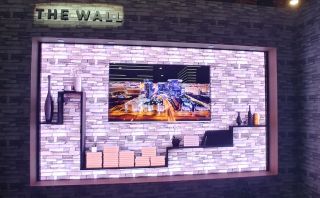 As CES is traditionally the annual stage on which the major TV brands unveil their coming TVs for the year, Samsung surprised everyone by going against the grain.

The Korean giant had other ideas, choosing to share the roadmap for its upcoming TV technologies – some of which are more imminent than others – rather than unveil specific 2018 TV models, as LG, Panasonic and Sony did.

We did the rounds with its 2017 QE55Q7F and QE65Q7F QLED TVs, and while they were generally impressive, they let themselves down by sacrificing black level performance for colour vibrancy, and concerning viewing angles.

As well as shining a light on future tech, Samsung is addressing such issues in its next generation of QLEDs. And here’s how…

While still running with QLED technology, Samsung has gone back to the drawing board and made changes to pixel structure and optics for its 2018 TV range.

The aim: to minimize blooming and improve black detail, and peak brightness in small image details.

While its 2017 QLED TVs were edge-lit, and not really up to displaying 2000 nits of brightness without backlight clouding, the new range will have direct, full-array local dimming backlight as opposed to zonal dimming, with potentially thousands of dimming zones.

In others words, the light will be coming directly behind the panels, rather than just from the sides, and will have a great deal more control over brightness than its previous TVs – which can only be a good thing.

The quantum dots will also be smaller in order to improve luminance efficiency, and there will also be a new Quantum Black Filter and anti-reflection film to reduce diagonal light leakage between pixels by a claimed 40%