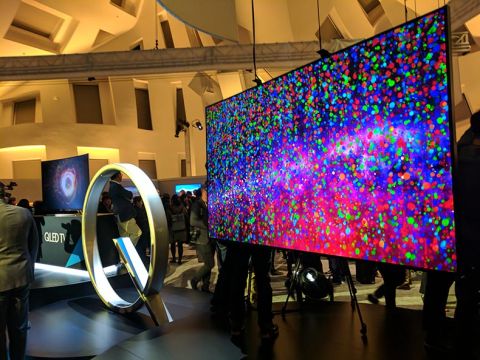 It looks like another TV tech rivalry is brewing: OLED versus QLED – and from what we’ve so far at CES 2017, we expect this one to be a gruelling contest.

For the coming year, Samsung has announced three QLED ranges: the flatscreen Q7 and Q9, and the curved Q8. Naturally, it’s the flashy flagship Q9 that has caught our eye…

Samsung has put a lot of thought into how its Q9 range looks (the company calls this new aesthetic ‘Q Style’). The Q9 bezel has shrunk to near-zero, with Samsung opting for a sleek metal finish. Thanks to the absence of backlighting, the mammoth 88in Q9 we looked at on the Samsung stand looked impressively thin, even if it didn't quite match the 2.57mm thickness of LG’s new W7 OLED flagship. In a word, the package is gorgeous.

Practicality hasn’t taken a backseat either, with users having the choice of two TV stands: an easel-inspired 'Studio' stand, and a 'Gravity' stand designed to make TV rotation easier.

For the past few years, Samsung has done away with built-in connectivity for many of its TVs, instead opting to house all inputs in a separate One Connect box.

Samsung is sticking with the concept, and for its 2017 models, the box connects to the TV via a 5m optical cable, though an optional 15m cable is also available. The box itself is very similar – roughly the size of a pencil case – only this time it also houses the ethernet port, and has IR blasters so your TV can respond to its remote even if the box is tucked away in a cabinet.

The new smart wand looks pleasingly similar to last year’s - it's just a little flatter and now silver as opposed to black. Samsung is shouting loudly about the remote’s voice command feature which, on first impressions, appears surprisingly intuitive. Even a vague request such as ‘sports’ results in the Q9 serving up a decent range of sports programmes and channels to choose from.

As well as the usual TV apps like Netflix, Amazon and BBC iPlayer, and Samsung's recommendation and discovery features, the Tizen-powered operating system on the Q9 includes new personalised services.

‘Music’ allows you to search for songs and artists across streaming services, and similarly ‘TV Plus’ (currently only on US models) lets you pull 4K and HDR content across sources into one place. Lastly, ‘Sports’ (also US-only for now) is a hub where you’ll find information and broadcasts on your favourite teams.

The interface gets more than just a lick of paint compared to last year’s version. Not only do the simple pop-up menus look cleaner – but you also get extra functionality. For example, in the source selection menu you can now power your sources on and off, thanks to the remote’s universal device control.

It doesn't sound like groundbreaking stuff, but as one of our favourite TV user experiences last year, first impressions are that these tweaks could be welcome. We’ll be digging deeper into the Samsung TV user experience when we receive our review samples…

MORE: What is Ultra HD TV and 4K TV? Everything you need to know.

Samsung's QLED TVs are also supposedly capable of 1500 to 2000 nits brightness – well over the 1000-nit minimum standard of the Ultra HD Premium specification. Last year’s top tier Samsung sets wore the prestigious badge, so we can only presume these will too.

Samsung was keen to show off QLED's capabilities at its First Look event at CES 2017, by sitting them next to rival OLED TVs. The Samsung QLED models appeared markedly brighter and seemed to show good even in bright room conditions. Of course, picture performance goes way beyond whose set goes brightest and we weren't able to investigate picture settings - we're keen to get the two side-by-side in our test rooms later this year.

For now, our initial thoughts are that QLED looks very promising. Rich colours of stained glass windows truly popped, and not only did brightness levels seem impressive (no matter the room lighting conditions), but black depth looked like it could give OLED a real run for its money.

QLED has wide viewing angles high up on its list of selling points, and in a comparison of the Q9 with one of Samung's 2016 KS9000 TVs, the QLED set did appear to maintain colour saturation and image solidity better than the LCD set.

The sound quality will remain unknown until we get the sets into a quieter test room environment - there aren't many TVs that could compete wth the hustle and bustle of the CES show floor.

QLED will almost certainly be at the centre of Samsung’s 2017 TV line-up, and only time will tell whether it will sit next to OLED as a ‘premium’ TV technology in harmony or not.

But with the Q9 and other QLED TVs delivering a ‘Q’ package (‘Q picture’, ‘Q Style’ and ‘Q Smart’), Samsung is aware of the need to offer a whole experience in the competitive TV arena.

Just how much of an impression it can make next to the flagship OLED models from competing brands will be down to the performance of its QLED TVs. First impressions, however, are very positive indeed. Q applause for Samsung and QLED…