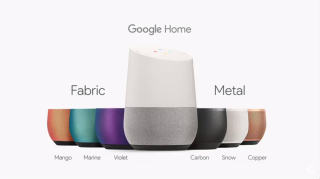 The speaker was first unveiled at Google's I/O developer conference in May with just a few details to snack on - now there's finally some meat to put on those bones.

Google is hoping its new wifi speaker will become the hub of your home life. Like the Amazon Echo, Google Home is voice-controlled, with Google Assistant ready to carry out your bidding in a similar way to Amazon's Alexa. Start your sentence, "Okay Google" and the assistant springs into life.

As you can probably deduce from the name, Google Home can also talk to other Google devices dotted around your home. For starters, you can connect multiple Home speakers to create a multi-room system, something that's currently unavailable on the Echo.

Also, if there happens to be a Chromecast or Chromecast Ultra hooked up to a TV, you can use Google Home to send voice commands to control video and audio playback.

Netflix is one of the first video streaming services to support Google Home, so you can kick-start a TV binge via a Chromecast dongle with a simple voice command.

Google Home is compatible with a number of music streaming services, including Spotify and Pandora, so you don't have to be a Google Play subscriber to take advantage.

The speaker can also interact with other compatible Google Cast speakers from partners that include Philips and Sony.

MORE: What is Google Cast? What speakers and TVs are available?

Use Google Home as part of a multi-room system and you can create groups and play the same music across all your speakers. Google claims only the closest speaker responds to your commands and commands won't interrupt other speakers using the same network.

Google Home costs $129 and comes with a free six-month trial of Google's YouTube Red subscription service. It's available to pre-order in the US now, and is due to ship on 4th November. There's no word on a UK release as yet.