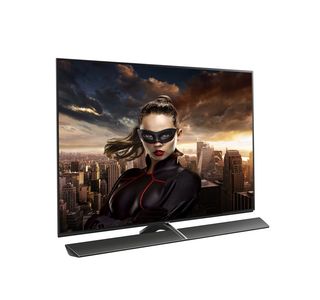 On paper, the Panasonic EZ1002 OLED TV ticks every box currently on everyone’s television wish-list – and then ticks a few other boxes you may not even have been aware of. For once, the usual TV manufacturer rhetoric of “boundaries pushed” and “unprecedented performance” looks well within the EZ1002’s grasp.

The EZ1002 is a 65in OLED flatscreen TV – this configuration is distinct from Panasonic’s previous OLED effort, the curved (and mightily expensive) TX-65CZ952B.

The panel – a 4K ultra high-definition affair, naturally – is HDR-capable, and is claimed to output more than double the peak brightness of a ‘conventional’ OLED panel. And, as well as supporting the HDR10 industry standard, the EZ1002 supports the new Hybrid Log Gamma HDR variant expected to be launched later this year. Furthermore, it’s able to output the full DCI colour space that’s a critical component of high dynamic range images.

MORE: What is OLED TV? The tech, the benefits.

To further beef up its credentials, the EZ1002 is driven by Panasonic’s Studio Colour HCX2 video processing – it draws on the company’s professional film-making and monitoring expertise and is claimed to be the most powerful video processing ever incorporated into a consumer TV. “The most accurate colours in the TV world” is how Panasonic describes the results.

It’s also equipped with Panasonic’s proprietary Absolute Black Filter, which the company insists can absorb ambient light and reflections in order to keep black areas of an image absolutely as black as possible. And as further evidence of its commitment to give ‘black’ just as much attention as ‘other colours’, the HCX2 processing strives to overcome an inherent OLED shortcoming – wonderfully deep and inky blacks but a shortage of detail therein – by minimising the time and energy required to switch a specific pixel from ‘off’ to ‘on’.

The EZ1002 also attempts to bring a little of Panasonic’s pro know-how to the consumer, by not only including ISF (Imaging Science Foundation) calibration settings but allowing users to upload their own colour 3D look-up tables via USB or SD card (‘users’ in this instance should more correctly read ‘inveterate tweakers’). And Panasonic has applied for THX certification, ‘Ultra HD Premium’ certification from the Ultra HD Alliance and Crestron certification from, well, Crestron.

Elsewhere, the EZ1002 is similarly thoroughly specified. Its audio performance has been specified and tuned by Panasonic’s legendary Technics subsidiary, and its ‘Dynamic Blade Speaker’ array consists of no fewer than 14 drivers (8 woofers, 4 midrange and a pair of tweeters) underpinned by a passive radiator. They’re integrated into what looks a very neat and stylish stand.

The operating system is the latest incarnation of Panasonic’s My Home Screen. Highlights include a Media Player app supporting 4K HDR10 and Hybrid Log Gamma, and (for the UK) a new version of Freeview Play with refined search functions and live thumbnails. Netflix, Amazon and YouTube 4K streaming are, of course, just a button-press away.

Overall it’s a flagship, and an exciting one at that. The EZ1002 goes on sale in Europe in June of this year, at a price yet to be confirmed. We’re guessing it’s not going to be cheap.