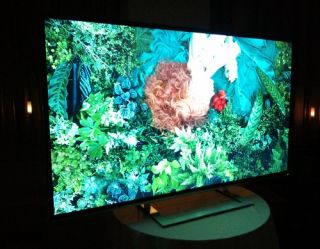 Toshiba has launched its first range of Ultra HD TVs with the launch of the LS9300 series, available in 58, 65 and 84in sizes.

See the full range of Toshiba TVs for 2013

Launched at one of the first events of CES 2013, the L9300 series will no doubt be joined by plenty more Ultra High Definition resolution sets, with the press conferences for the likes of LG, Samsung, Sony and Panasonic scheduled later today.

Toshiba also announced details of other TV ranges due out in 2013. The L7350, L7300 and L4300 are all billed as 'Premium LED TVs with Advanced Cloud Technology', the cloud technology referring to Toshiba's new look smart TV internet platform.

More details and pictures on the Toshiba 4K Ultra High-Def TVs and the rest of the 2013 TVs as and when we get it.

Keep track of all the news coming out of the world's biggest tech show with our CES blog.