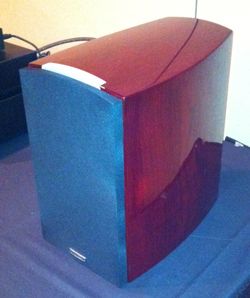 But we tracked the company down in a suite at the Treasure Island hotel in Las Vegas, where we were able to see several prototype models it's working on and which will be coming to the UK later this year.

Exact technical details remain under wraps for now, but we did manage to snap some shots of several key new products which are currently in development:

Due to launch in late May, the SX series will sit above the MX models and will be sold as a bookshelf speaker (shown right), alongside four floorstanders.

A new floorstander with five drive units, available from March, and likely to sell for around £1800. It will come in two standard wood veneer finishes and two piano gloss ones.

As the name suggests, Wharfedale celebrates its 80th anniversary this year and IAG is planning a retro-style speaker tuned to a more 'British sound' to celebrate. It should be available from May for just under £500.

Coming from Quad is the Platinum system of electronics (below), consisting of the DMP CD/media player and matching stereo amp or a pair of monoblocs. The complete system is expected to go on sale in the UK for around £5000 in April/May. It's shown here being used with an Audiolab M-DAC.

Based on the 9L series, the Quad Active (below left) will launch in July or August for around £600-£700 a pair. There's ampliification built in to the left speaker, which then also drives the right. There are touch sensitive slde controls for volume on the front, optical, coaxial, analogue and USB inputs round the back, and a subwoofer out.

There's also a revamped version of Quad's famous electrostatic speaker in the pipeline, as well as a new Wharfedale Powercube subwoofer with dual 10in drivers, and a new sub for the Castle range.

We'll bring you more details on all these new models as soon as we get them, and look forward to testing them in our listening rooms.