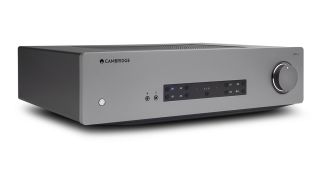 Ever since Cambridge Audio launched the second generation of its CXN music streamer in late 2018, we’ve been half expecting the rest of the 2015-released, four-strong, midrange CX series to follow suit. And indeed, now almost a year later, it’s the turn of the range’s two amplifiers. (Just the CXC CD transport to go, then...)

Replacing the CXA60 (a multiple What Hi-Fi? Award winner) and the CXA80 respectively are the aptly named CXA61 and CXA81, which utilise new components and sport new features in a combined effort to dethrone the class-leading competition (namely the Rega Brio and Elex-R).

The CXA61 (£749/$999) hasn’t made gains in power – like the CXA60, it still delivers 60 watts into each channel – but Cambridge says it has upgraded most of the op amps and capacitors in both the analogue pre and power sections to achieve a higher level of performance.

aptX Bluetooth isn’t only integrated in the CXA61 (it was only granted to the CXA60 via a £70 optional dongle), it’s of the superior aptX HD kind, allowing for wireless hi-res (24-bit/48kHz) transmission. Four RCA sockets and a single 3.5mm jack provide legacy input connections, while analogue outputs span RCA preamp, subwoofer and 3.5mm headphone outputs.

The difference between the two models remains largely in power, price point and connectivity. The CXA81 (£999/$1299) is, like its predecessor, an 80-watt-per-channel variant, promising more sonic authority over its sibling. It mirrors its sibling’s exhaustive spec, but where you’ll find the 3.5mm input on the CXA61 there is an XLR balanced input in its place here.

The DAC inside the CXA81is the more advanced ES9016K2M model, too.

Those familiar with the former CX amplifiers will be able to see that Cambridge has carried their design DNA into the new models. The casework appears unchanged, however the balance and tone controls of the originals have disappeared from the front panel in the name of minimalism.