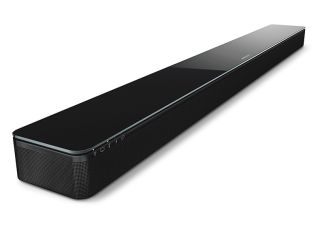 Unveiled at CEDIA 2016 in Dallas, we now have some more details on the new Bose speakers.

The SoundTouch 300 soundbar is wi-fi and Bluetooth enabled for connection to Spotify, Pandora, and other music streaming services. It also has "PhaseGuide arrays" which can separate channels of a soundtrack and send to places in the room without speakers to provide a more atmospheric sound.

The SoundTouch 300 supports 4K Ultra HD and HDR (high dynamic range) through HDMI, so it's unlikely you'll need to replace it (until 8K comes out, that is).

The 650 system consists of those four satellites, a slim centre channel, a wireless subwoofer, and a hub (which looks a bit like a disc player) that houses all the power, amplification, wireless streaming and connections.

There are six HDMI inputs that can each carry a 4K HDR signal, and the system has wi-fi and Bluetooth compatibility. They can also be linked with other SoundTouch products you have in your home for a mutiroom system.