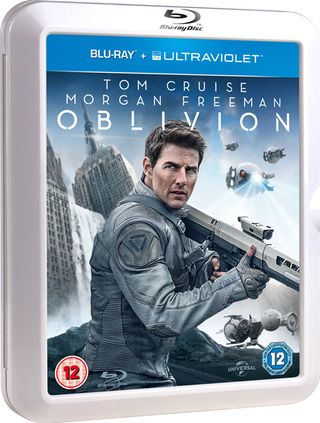 A lot of home cinema kit goes through our testing rooms. And to put it through its paces properly, we need to try it with a whole range of DVDs and Blu-rays, from bright, bold summer blockbusters to brooding dramas – and everything in between.

We seek variety in contrast, sound, colour, motion, detail… the list goes on.

Some of these films might not be Oscar-worthy, but all are worth a place in your library. Here is our selection of the best Blu-ray films and TV shows to buy in 2013, from the What Hi-Fi? Sound and Vision testing rooms.

The Adventures of Tintin 3D

The Adventures of Tintin looks glorious in 3D. The cutting-edge animation is coupled with a compelling storyline to create a fun and wholesome family film. One of the best Blu-rays for all the family.

It doesn't provide anything completely original within the sci-fi genre, but Oblivion is still an exciting watch. It also became an instant test disc favourite for us in 2013.

TT3D: Closer to the Edge

Another three-dimensional masterpiece. TT3D documents the Isle of Man TT motorcycle race, focusing on the 2010 event. We were on the edge our of seats for the majority of this film, and highly recommend it, not just as a system work-out.

Tom Cruise again. All four films have great strengths but it's Ghost Protocol that provides the most visually stunning scenes.

The scene in which the protagonist finds himself scaling 2700ft Burj Khalifa hotel in Dubai is a test favourite of ours. Our hands are still sweating after watching that…

Without wanting to give anything else away, this is simply a gorgeous series that has to be seen. It's the Beeb at its best and looks great on Blu-ray.

On the face of it, Pacific Rim seems like another sci-fi/fantasy film that's going to start bad and end even worse. In fact it's quite the opposite.

It's directed by Guillermo del Toro, for a start. The CGI on offer is some of the best we've seen, and the story (while completely mad) is told rather well too. Pacific Rim looks fantastic in HD and has a hair-raising soundtrack to match.

Getting Baz Luhrmann to tell this classic tale was an inspired move. It's visually superb. Colours are punchy and the soundtrack offers plenty of pizzazz.

Don't expect too much in the way of 1920s jazz, though – the dancefloors here are all about Jay-Z and Jack White… Making it one of the best music Blu-rays of 2013, too.

Cloud Atlas has become one of our favourite test discs. Its a fascinating film that mixes several genres to great effect. The nature of the story presents a vivid and varied landscape for sound and vision, and is a great test for any screen – the bigger, the better.

A walk down a memory lane paved with 8-bit Tetris blocks. Wreck-It Ralph is full of eye-candy, and is a must if you're a gaming fan.

Sound is first-class as well, with 7.1-channel DTS-HD Master Audio supported. Time to wire up those speakers…

A must own disc. Quite possibly one of the most visually stunning films we've had the pleasure of watching all year. It might not sprint along like the Mission: Impossible flicks, but it still manages to push high-definition to its limit. Blu-ray or bust.