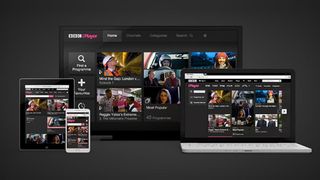 BBC director-general Tony Hall has announced the launch of the latest version of iPlayer, which boasts a "consistent, optimised, responsive design" to work across a range of devices.

The new iPlayer also sports a fresh look and comes with new features. It'll roll out across TV and online platforms first, with smartphone and tablet apps updated in the coming months.

First unveiled on Christmas Day 2007, BBC iPlayer is now available on more than 1000 devices across four screens and averaged in excess of 10 million requests per day in January.

The BBC says iPlayer has been "redesigned from the ground up", with its core functionality "built for the future" and a viewing experience "tailored to device being used by the viewer".

It is also claimed the new iPlayer helps you find and discover content easier, with smarter search functionality; improved access to channels and categories; and image-led navigation.

The new iPlayer is rolling out from today [11.03.14] as an opt-in preview on computer, tablet and mobile browsers by visiting www.bbc.co.uk/iplayer, in addition to a range of smart TVs.

Meanwhile, the BBC has also confirmed a range of dedicated iPlayer commissions – including a selection of original drama available now and comedy shorts to be introduced in May.

The BBC says the new commissions will "introduce audiences to new talent and give established favourites the chance to do something different and innovative".

Only last week, Tony Hall revealed plans to shut BBC Three as a broadcast channel in late 2015 as part of cost-cutting measures, transforming it as a "new and innovative online service"

Hall said of the new iPlayer: "This is an exciting day for us. BBC iPlayer is really popular, and new iPlayer will be even better.

"You’ll be able to find so many more programmes you might like – and I hope everyone enjoys the new design. It’s just a first step to re-inventing BBC iPlayer."