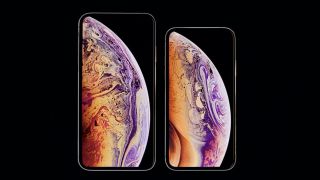 Apple has launched two new iPhones, the iPhone XS and the iPhone XS Max. The two phones both feature a new Super Retina OLED screen, but come in two different screen sizes. And yes, they still have a notch.

The iPhone XS has a 5.8in screen, while the XS Max features a 6.5in display – Apple's largest-ever iPhone. Using OLED technology and with support for Dolby Vision and HDR10, the phones have 2.7 million and 3.3 million pixels respectively, and claim the best display performance on an iPhone.

"The most advanced iPhone we've ever created," was, unsurprisingly, how Apple heralded its new smartphones. The phones, which were accidentally leaked by Apple itself this morning, use surgical grade stainless steel and sport a new gold finish.

It's the first 7 nanometer chip, with 6.9 billion transistors. It's a "6-core CPU", with two performance cores and four for efficiency. It's billed as 50 per cent faster than the current A11 chip and promises to power better performance across the phone, from the camera to games.

And the cameras have been upgraded. There's a 12MP wide-angle camera, 12MP telephoto lens, 7.2MP front camera and improved True Tone flash. There's a new Smart HDR feature for maximising colour performance, too. The faster sensor allows for better videos, and you can record 4K video with stereo sound.

How about battery life? The iPhone XS claims 30 minutes more life compared to the iPhone X, while the XS Max delivers an hour and a half extra juice.

How HomePod was made: a tale of obsession from inside's Apple audio labs

Apple AirPlay 2: everything you need to know