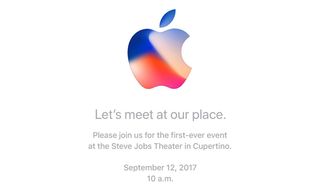 It wouldn't be September without an Apple launch event so we can all rest easy now that Apple is confirmed the time and place for its iPhone 8 reveal.

The event will take place on Tuesday 12th September at the Steve Jobs Theater in Cupertino, starting at 10am local time, which is 6pm UK time.

As always, expect to see the new iPhone revealed, with the smart money on two new iPhone 8 handsets and a special edition model, which may be tied to the 10th anniversary of the iPhone.

The invitation comes with the tagline, "Let's meet at our place", so feel free to begin guessing what that could refer to. More details on the Apple HomePod (which is due to launch in December)? Confirmation of a 4K HDR Apple TV? We shall see.

We'll be covering the event live, so look out for all the news, plus hands-on reviews of the new Apple devices, and thanks to an Apple stream, you'll be able to watch along live.