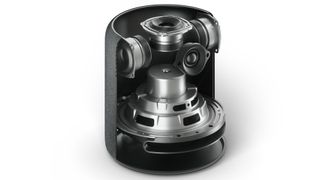 Inside the Echo Studio speaker is a 24-bit DAC and support for high-resolution, lossless music playback up to 24-bit/192kHz. Amazon says its entire library of over 50 million songs is available in CD-quality, which Amazon is calling "HD", while there are said to be "millions" of lossless audio songs, known as "Ultra HD" on Amazon Music.

Back to the speaker itself and the Amazon Echo Studio has left, right and top midrange speakers that promise directional sound, a directional tweeter claiming "high end performance", plus a 5.25-inch bass driver and bass port in an effort to deliver "the best bass response we knew how to deliver".

Got a 4K Fire TV? You will be able to connect to the Echo Studio, so when you're playing Atmos content on your Fire TV, it can play through your Echo Studio speakers. And you can connect two Echo Studio devices together for a stereo pair, too. The Echo Studio will be available at £189.99 ($199.99), and pre-orders open from today.

The news was announced at an Amazon event in Seattle where the company also revealed a whole new range of Echo speakers and devices.

There's a new Amazon Echo, promising increased volume and a fabric design, an Echo Dot with a clock, an Echo Show 8 with an 8-inch HD display, the Echo Glow smart lamp and the Echo Flex, a plug-shaped Alexa device for adding a tiny Alexa to any wall socket.

And it wasn't all home speakers, the company also launched its first pair of wireless buds, called, you guessed it, the Amazon Echo Buds. The Echo Buds use Bose active noise-cancelling technology and are the first "native" hands-free Alexa headphones.

Promising "excellent sound", each earbud has two balanced armature drivers. The Echo Buds boast a 5-hour battery life, boosted to up to 20 hours of battery life with the charging case. They'll work with Siri and Google Assistant through your phone, too. Due on sale in October, the Echo Buds will cost £120 ($129), a nice saving on the likes of the Apple AirPods and plenty of the best wireless earbuds on the market.

Amazon also teased two more products in the pipeline: Echo Frames, prescription smart glasses with Amazon Alexa inside, and Echo Loop, a smart ring. Echo Frames and Echo Loop will be available in limited volumes by invite only, costing $179.99 and $99.99 respectively. Both are due for release later this year.

Oh and there was an Amazon Smart Oven. There really isn't much left that Amazon hasn't put Alexa inside...

Amazon Echo vs Dot vs Plus vs Spot vs Show 5: which is best?