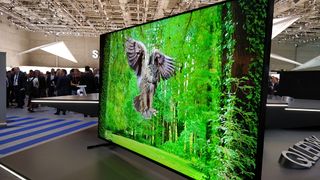 Europe's biggest technology show once again gave us a glimpse at the now and the next in the world of consumer electronics. There were new products and cutting-edge tech from brands including AKG, B&W, LG, Philips, Samsung, Sony, Technics and many more, as 8K TVs battled with AI speakers for the attention of our eyes and ears.

Whether it's for Christmas this year or for the wish list in 2019, our round-up of the best of IFA 2018 should have something to set your tech juices flowing.

Is 8K a desperate ploy for headlines from a TV industry bereft of other ways to make people take notice of TV tech or really an imminent quantum leap forward for AV early-adopters? Whatever you think, and we'd sway towards the former for now, Samsung has a full range of 8K QLED sets ready for release in a matter of months, making it the most complete step in this pixel-packed direction.

...and if you're having 33,177,600 pixels, why not go similarly over the top with your sound system? An 8K soundbar might sound a little ridiculous - and, OK, in a way it really is - but with NHK set to begin broadcasting 8K TV in Japan later this year, and 22.2-channel sound the suggested accompaniment, why not get on board with a suitably 8K-ready soundbar? It's at least a little easier to accommodate than 24 speakers...

Back in the real world, Philips looks to have rubber-stamped its reemergence at the top tier of TV manufacturers with a neat tie-up with Bowers & Wilkins. Both brands are eager to reach new consumers and the OLED+ 903 with Sound by Bowers & Wilkins aims to be something approaching an audiophile's choice when it comes to flatscreen TVs. First impressions of the B&W sound system were promising, suggesting this premium TV could deliver class-leading sound and vision from one box.

Serious hi-fi is thin on the ground at IFA, with the big-name, jack-of-all-trade  electronics brands taking up much of the show floor. Panasonic found space to slip a new slice of high-end electronics on to the Technics section of its booth in the shape of the SL-G700 SACD player and streamer. One picture had thousands of you intrigued, helped by its equally easy-on-the-eye amplifier partner, and we look forward to seeing and hearing the finished article around March next year, possibly timed for the Munich High End show.

Sticking with serious hi-fi, how about an £8000 digital music player from Sony? The DMP-Z1 is far cry from a mere Walkman – you wouldn’t be able to fit the amplifier-sized hefty block of aluminium in your pocket, for one – but it looks and sounds stunning. It can play everything up to 32-bit/384kHz PMC and quad DSD, uses high quality components and clever DSD upscaling tech, doubles up as a headphone amplifier and a DAC, has 256GB on onboard storage, and even does Bluetooth. But we can’t stop drooling over that gold-plated analogue rotary volume dial.

Noise-cancelling wireless headphones are all the rage right now so it was no surprise to see a headphone manufacturer of Beyerdynamic's standing offering a new pair to market. But how to stand out? Well, how about an app that tunes the sound so it's personalised to your hearing? And flashing lights inside the ears to indicate battery level or Bluetooth connectivity? That's what the Laguna ANC headphones opted for, and we're smitten. Based on Beyerdynamic's pedigree, we're eager to hear how good they sound.

It’s not all about big products with big price tags. AKG’s much-anticipated follow up to the award-winning Y50BT headphones also has us excited. The new Y500s are wireless on-ears with 33 hours of battery life, a comfortable, foldable design, and nifty features like pausing music when you take the headphones off and playing automatically when you put them back on. They sound good, and they’re only £129.

Does Sonos have a pair of floorstanding speakers in its range? No, but Harman Kardon does. Its Citation Series features various-sized multi-room wireless speakers and a soundbar that can be used individually or as part of a wireless 5.1 AV system. Neat. They all come with AirPlay, Google Assistant and Chromecast built-in, can stream 24-bit/96kHz hi-res audio and look winningly elegant in their wool fabric finishes.

Wireless headphones were everywhere at the show, but nobody can match Sony's newly-launched flagship cans. How do we know? We've got the exclusive review. There are rivals out there that can beat them in specific areas, but none offer the same exceptional all-roundedness. Taken as a whole the WH-1000XM3s are simply sensational – the perfect long-haul travel companion, office upgrade or daily commute enhancement.