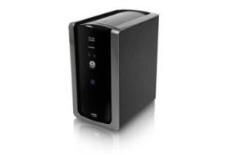 Without the awful bundled software, this Linksys would be a truly formidable device

The obvious difference between the Linksys and its rivals is the presence of an LCD screen and navigation buttons on the front.

These allow you to carry out a number of tasks without having to go through your PC – such as checking the health of your hard disks, updating the system's firmware, and copying data directly from an SD card or USB stick connected to the front of the unit.

Upgrading is easy. There's one 500GB disk pre-installed, but there's also a spare bay for a second hard drive.

Then you can take advantage of RAID 1 back-up, or combine the capacity of both drives for maximum storage.

You can also add an external hard drive to the second USB port, located on the back. Alternatively you could use this second USB to share a printer.

Great device, shame about the software
The Linksys isn't configured to work with Squeezebox, but every other streaming device we tried (including an Xbox 360) found the Media Hub immediately.

What's more, accessing the Linksys from a web browser brings up a screen that looks and feels like a proper media player, making accessing your music and movies a pleasure from anywhere.

However, we couldn't get the NAS installed simply using the bundled software. In the end we had to map a network drive manually and configure the system on the web browser.

Which is, frankly, very fiddly and twice as annoying.

Packaging a device with software that doesn't work just isn't good enough. Otherwise the Linksys would be getting five stars.