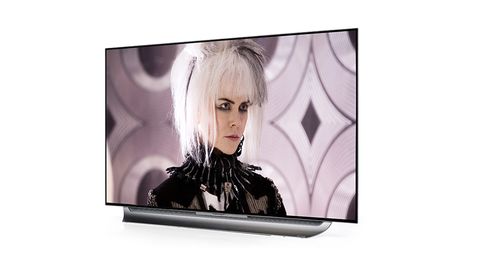 LG has been killing it on the TV front in recent years. Not only has it been making and selling its own excellent OLED tellies, it has also sold OLED panels to all its rivals - with the exception of Samsung, who is pushing QLED instead.

But standing still is a sure-fire way to get caught by your rivals, and in LG’s case a resurgent Samsung must be of particular concern. Interestingly, LG’s 2018 strategy revolved not around improvements to its OLED panel but to the brain that drives it.

The Alpha 9 processor certainly brought with it improvements in a number of areas, but it’s fair to say (on the evidence of this C8) LG took a fairly small step forward in 2018 - even if it was already at the front of the pack.

In 2017, all of LG’s OLEDs had the same panel and picture processing smarts – you selected your model based on speaker arrangement, aesthetic appeal and price.

With 2018's sets it was much the same story - except there was a more dedicated entry-level model, the B8, which did without the Alpha 9 processor and its supposed picture processing benefits.

So if you want the best picture LG offered in 2018, your entry-level point is the OLED55C8, or OLED55C8PLA to give this TV its full name. The benefits of the Alpha 9 processor certainly sound worthwhile.

A four-part noise-reduction system, frequency-based image-sharpening, object-based contrast enhancement and adaptive colour mapping are all on the menu.

The TV can even apply dynamic metadata to HDR formats that natively carry only static metadata, resulting in features that LG refers to as HDR10 Pro and HLG Pro.

There’s also support for high frame rate (HFR) content, although a lack of HFR content makes this more of a potential future bonus rather than something to get excited about now. Still, this is the most advanced picture processing LG is currently capable of, and that should be a source of some anticipation.

Those smart innards are matched by a smart appearance. There isn’t much room for aesthetic invention in current TV design – they’re essentially big slabs of screen – but LG should be applauded for coming up with something different.

It’s not just the supreme slimness of the screen, but also the elegance of the pedestal stand. It’s a unique, interesting design, particularly in terms of the wide, ridged mouth beneath the screen - as well as looking rather cool, is designed to funnel sound from the downward-firing speakers out towards the listener.

Those speakers and the connections (four HDMIs, three USBs, aerial, satellite, optical and headphone) require a plastic enclosure that’s bolted on to the back of the panel. You’re not getting uniform super-slimness, then, but this is undeniably a more stylish TV than the B7 and C7 it replaces.

It’s a shame LG hasn’t updated its set-up process, which is still the same one introduced with its webOS platform back in 2014. It’s quick and streamlined, but looks like it’s running at a relatively low resolution and with little dynamic range. It provides a rather inauspicious introduction to your flash new telly.

MORE: OLED vs QLED: Which is the best TV technology?

Not a huge amount changed for LG’s 2018 implementation of the webOS platform. The customisable tab system is pleasant, and the app selection is essentially unchanged, including Netflix and Amazon in 4K HDR, all of the catch-up services and on-demand movies from Google Play TV & Movies and Rakuten.

The Gallery feature (previously known as ‘OLED Gallery’), which turns your TV into an art installation, returns with significantly more pictures (46 compared to last year’s 13). While the OLED panel is excellent at displaying photos, it’s not something that we anticipate many will use often.

LG is making lots of noise about its ThinQ AI, which combines with enhanced voice recognition to make controlling the TV with your voice smarter and more natural.

It can certainly prove a useful shortcut to the odd picture setting (“turn on Game Mode”, for example), but we haven’t discovered many uses beyond that.

The webOS is definitely faster and more fluid than it’s ever been before, though, making switching between settings, apps and sources a very zippy affair.

The C8 is an exciting performer, but you have to turn off many of its super-advanced features to get it performing at its best. The object-based contrast enhancement and adaptive colour features are both activated when you select the Vivid mode.

But even after spending a full day tweaking settings on this LG TV, we couldn’t get colours to behave themselves in this mode. Everything looks over-saturated and unnatural, so we’d avoid it entirely.

Instead, we recommend the Cinema Home preset for HDR content and Standard for everything else. And each of these needs only a little tweaking – a relief given the mind-bogglingly confusing, almost Kafkaesque picture menus.

The fact we disable a number of the C8’s headline features might suggest the resulting picture offers little improvement over last year’s models. Thankfully, that isn’t the case. It’s a markedly sharper, more detailed and punchier picture than that offered by last year’s OLEDs - even without Vivid mode active.

Play the opening of Planet Earth II on 4K Blu-ray and the introductory selection of clips provides evidence of a supremely capable, consistent and natural performer. The snow of the mountains is purer and brighter than last year, and there’s more bright detail, too - as evidenced by the distinct, fluffy, three-dimensional clouds.

A sun-baked ridge of dunes is a gloriously rich, burnished orange, the seemingly endless canopy of a rainforest is lusciously, vividly green. The ocean surrounding a tropical island combines beautiful, enticing aquamarine around the shore with steadily, subtly deepening shades of blue out to the ocean.

It seems the Dynamic Tone Mapping feature (which adds dynamic metadata to static metadata signals) is contributing to the vibrancy of the colours and the punch of the picture.

Certainly the image looks duller and flatter with it switched off. What’s more, its enhancements aren’t over-exaggerated – the picture is exciting, but natural and full of nuance. Skin tones are subtle and realistic, too.

As with last year’s models, the C8 also allows you to experience dynamic metadata thanks to its Dolby Vision support, and in most cases this results in even greater contrast and stronger colours.

Regardless of the type of HDR, the Samsung Q9FN is capable of going even brighter and looking more vibrant - but the C8’s natural subtlety and newly discovered punch is an absolute delight in its own right.

In fact, it’s more than a match for the Sony A1 when it comes to brightness and punch, and that wasn’t the case with last year’s LG OLEDs.

The C8 and A1 have a lot in common, with the core differences being the way that the Sony slightly exaggerates blacks for greater depth and fuller colours while the LG’s more balanced approach results in greater dark detail and brighter peaks.

The A1 does deliver better motion, though, partly because motion processing is one of Sony’s strengths and partly because LG doesn’t seem to have improved much in this area.

While many find turning TruMotion off entirely the best bet, we settle on three or four points of both de-judder and de-blur, even though there’s still occasional artefacting evident in particularly tricky bits of fast motion.

Last year LG blew us away with the quality of its upscaling, and it’s seemingly business as usual for 2018. The stability and control of the images it produces from standard-def signals is significantly greater than any rival is currently able to muster. If you’re still a frequent SD-watcher, you have to check out the C8.

We’re still watching plenty of Full HD and, while the LG’s upscaling is less miraculous here, picture quality remains good. Some rivals offer a little more detail and slightly sharper edges, and there’s recently been a move by some manufacturers to add HDR-like punch and contrast to SDR sources such as Blu-ray, which LG eschews.

That means it delivers a more subdued picture than the likes of the Samsung Q9FN or Sony XF9005, but the C8 again impresses with how natural and subtle its colours are, and with the depth and solidity of its blacks. It’s an exceptionally watchable all-round picture.

Meanwhile, input lag for games remains unchanged from last year at 21.4ms. That’s more than fast enough for even super-serious gamers. This is a great TV for games, too, thanks to its natural sharpness and colours.

It’s a shame that LG hasn’t upped its audio game, particularly as the Dolby Atmos branding might reasonably entitle you to assume the sound is a bit special.

That audio-funneling stand results in a better-projected and more direct presentation, but tonally it’s quite a thin delivery. LG is again differentiating its OLEDs largely on sound quality, so it’s perhaps inevitable the C8, the nearly-entry-level model, would have only mediocre sound.

It doesn’t sound bad, but the price of the C8 puts it in the firing line of both the Sony A1 and Samsung Q9FN, both of which are more sonically capable.

Of course, our advice would be to partner any new TV with a separate sound solution, which makes the TV’s own sound less relevant.

The OLED55C8PLA didn't mark a giant leap forward for LG’s OLEDs. Instead it improved on 2017’s models in a number of (individually small but collectively significant) ways.

The upshot is an image that’s brighter, punchier and more detailed, while maintaining the black depth and naturalism we love. It’s an exceptional performer, one that gives the Sony KD-55A1 a run for its money.

When we first tested it the C8 cost around £3000 which we felt was a bit steep, but now that, two years on, you can get it for considerably less it's a much better buy. Right now, this is simply an excellent TV in its own right, and one that is thoroughly deserved of its 2018 What Hi-Fi? Award.

See all our LG TV reviews