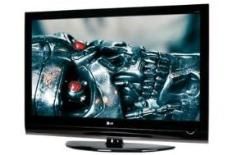 It’s got great specs and that all-important extra inch, but the LG’s picture doesn’t quite convince

As a 47 inch TV, this LG might have an extra inch of picture, but it also has a bigger case, and the sheer quantity of glossy black on display with the LG 47LG7000 is a little unappealing.

It has a sparkly red stripe that runs around the edge of the set in a nod to the scarlet posterior sported by some of LG's other recent screens.

Switched on, the LG welcomes you with excellent, clear menus, but calibration throws up a problem we're rather too familiar with: the backlight control forces you to choose between white punch and black depth.

The Fresh Contrast option goes someway to extend visible contrast, but you will find yourself having to make a compromise. The set's own Intelligent Sensor, which is generally best avoided, results in a dull picture.

Even with the TV calibrated, outdoor scenes look rather overcast, so Downey Jr.'s trek through the desert in the Iron Man Blu-ray looks a little less hot and horrible than it should.

Skip back to the cave scenes and the LG also exhibits a comparative ?lack of insight into blacks and an uneven backlight.

Natural, neutral colours
It's not all bad, though. Detail levels in brighter scenes are very decent, while overall colour balance is naturally neutral.

The 100Hz TruMotion processing might not be much cop, but with it turned off the '7000 is able to reproduce movement without judder, although a bit of smearing creeps in.

There's still some punch and black detail missing, but the picture is very enjoyable. Other than a bit of fuzziness around edges, Freeview isn't bad, either, and the LG pleases with its accurate colours and clear EPG.

It finishes strongly with a fairly direct, detailed sound performance and a spec including USB, Bluetooth and four HDMIs, but, still, you can get a much better picture than this, particularly with HD, for the same sort of money.