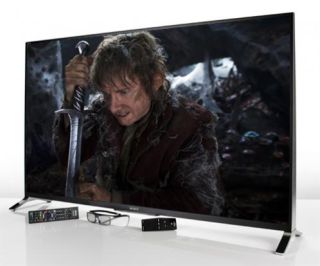 Picking the right TV can be a daunting task. Answer the six questions below and you’ll have a better idea of the screen size, technologies and features you need.

It’s tempting to buy the biggest screen your budget will allow: better that than feel short-changed in a few years’ time. It’s easier, too: prices have fallen so that even big-screen sets are fairly affordable, while most modern TVs over 32in offer 1920 x 1080p resolution, properly described as ‘HD Ready 1080p’, but ubiquitously referred to on the high street as ‘Full HD’.

Of course, it is possible to over-do it. TVs radiate light into your room, so sit too close to a giant screen, and it could become wearing over time.

2) Is my budget limited?

If it is – and in 2010, we can understand that it might be – your best bet is to buy the largest, best-performing but simplest TV you can. You can always add HD access and network functions later: what you can’t do is make a too-small TV bigger. It’s also hard to improve the picture quality of a poor performer.

True, you’ll likely lose out on 3D too, but since viewing 3D at home will require even more expense on your part – you’ll have to buy both suitable 3D source components and 3D specs – that’s probably not an issue in context.

What if price isn’t the primary factor for you? First, you need to choose what type of TV you want. We’re not referring to LCD, LED-backlit or plasma technology here. The demarcation lines between these sets have blurred so markedly in recent years that now, we prefer to recommend TVs on the basis of their performance, not the display technology they use. No: what we’re talking about here is 3D, so…

3D support is an intrinsic part of a television’s make-up. It requires a very high refresh rate – a true 120Hz minimum – and the fact is many (most) conventional televisions don’t meet that spec, because it isn’t necessary for conventional broadcast or high-definition TV.

Some TVs will be ‘3D-capable’: they’ll have the requisite refresh rate to display the content, but won’t include 3D glasses or (in some cases) the infra-red emitter that links the TV to its glasses.

Instead, this kit will be offered as an add-on upgrade pack, which helps keep the initial purchase price of the set down, and ensures you’re not paying for components that you might not want to use just yet. However, these 3D upgrade kits can’t be added to older TVs, or to 2010 models that lack 3D support.

All of which means, if you’re planning to buy a new TV this year, you’ve got to consider 3D. Even if you don’t want to pay extra for it now, it demands your consideration because, unlike other technologies, you can’t upgrade to it later – not unless you’ve bought a compatible TV in the first place.

Of course, you may have no interest in 3D, full stop. In that case you should be able to save yourself a few quid and still get a very decent 2D TV into the bargain.

4) Do I want to pay extra for a TV with Freeview HD?

After 3D, TVs with built-in Freeview HD tuners are big news in 2010. However, as exciting as it is, built-in HD will add a premium to the price of any TV, so if you’ve already got yourself sorted with Freesat HD or with a pay-TV HD subscription, it may be an expense you can forgo. That’s doubly true if you live in a part of the UK unable to receive Freeview HD for a few years yet (the roll-out won't be complete until 2012).

5) Do I want to pay extra to access the internet?

Your final decision is whether you should buy a TV with network features and internet access.

In terms of convenience and flexibility, this is a huge advance: who wouldn’t want services such as the BBC iPlayer, LoveFilm and Skype on their TV? However, as desirable as these advances are, they’re also available in other sources: for example, PS3 owners can access the iPlayer, while Sony’s new range of Blu-ray players can access LoveFilm on demand.

So if you can afford a network-ready TV, great: if you can’t, don’t beat yourself up about it. Better to buy the best TV you can than an inferior set with apparently superior network functionality.

6) Should I choose LCD, LED or plasma?

Not the point… in the early days of flat TV, almost every large-screen set used plasma technology, while smaller models relied on LCD. The crossover point from one TV technology to the other seemed, roughly, to be set at 32in.

But that was the old order of things, a state of affairs dictated largely by the superior picture quality offered by plasma TVs and the comparatively low quality of prevalent LCD technology.

Other technology standards have fallen by the wayside in recent years, too: for instance, Panasonic’s TX-P46Z1 plasma proved it was possible to make a super-slim set using a plasma panel.

Yet, even now, we still get asked ‘should I buy an LCD TV, or a plasma?’. And the simple answer is that it’s just not that simple: each technology enjoys some subtle advantages over the other, but these don’t define how good (or appropriate for your needs) a TV is.

For that reason, our reviews section on whathifi.com features five-star sets that use all three key types of TV technology.