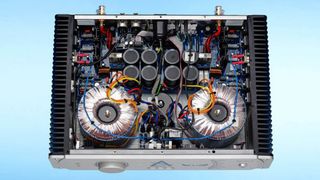 The brains and brawn behind your hi-fi. Underestimate the stereo amplifier's importance in how your system sounds at your peril.

This list of the best stereo amplifiers from the pages of What Hi-Fi? showcases the power providers that have helped to get the most out of our set-ups over the years.

Big or small, budget or high-end, functional or stylish, these amplifiers have left an indelible impression.

Arcam got off to a flier with its first product, the A60. It was a well-equipped amp, with a decent array of line-level inputs and a capable moving-magnet phono stage, and we were very much taken by its sound quality back in 1979. To this day, it's still able to showcase the smooth presentation and expressive midrange that made it such a fun and entertaining listen. And that wood finish was, indeed still is, rather lovely.

Audiolab's 8000A caused a stir thanks to its "superb finish and styling", although today it looks like a grey tinged box with lots of dials. Still, distinctive looks aside, it offered excellent sound and features including bass and treble controls, a stereo balance control and a separate record selector, so you could "listen to one source while taping another". The sound was smooth with "plenty of presence and detail". Add its fine build and features and the 8000A was great value for money.

The Mission Cyrus One – back when Cyrus was a part of Mission – was very much a product for audiophiles, despite its budget price. It had no tone or balance controls and carried plenty of inputs for sources. The One communicated a precise soundstage, but it was also capable of handling low-level details that other amplifiers "repressed or simply rendered messy". Combine that sound with a superb build quality, and you had an amp whose performance could rival pricier options.

This Naim came in three parts, with the 32 pre-amp, its accompanying power supply and the now legendary 250 stereo power amplifier. It was a popular combination that made up many hi-fi users' systems in the 80s, and was capable of delivering drive, dynamic punch and powers of organisation that few could match. It was an impressive combination and the 250 has proved to be so popular that it's received several makeovers since, getting better with each iteration.

The A85 was different from its forebears. Where previous Arcam efforts veered towards warm and safe, the A85 had the ferocity of a sledgehammer smashing through glass. It worked well with all genres of music, with no trace of boom or bloom, and a clarity that extended throughout the frequency range. We noted its "immaculately clean" midrange that had a resolution its rivals couldn't match. The A85 was a sonic leader in its class, a fully featured amp that blew away the competition.

The Caspian amp had been around the block a few times, as Roksan improved the design and performance. The fruit of that labour was the Caspian M2. With a revised circuit layout and upgraded components, it had a bigger, more powerful presentation than before. It had a sense of authority, along with a dynamic sound that was full of detail, finesse and a rich tonality, making for an immensely capable effort. The build and finish were excellent, it was easy to partner with and, while its distinctive look caused some consternation, there was no doubting its status as an exceptional performer.

We weren't fully convinced by the original Supernait, which sounded less dynamic than we liked. This issue was not a problem for its successor, a "supremely stable, confident-sounding" amplifier that boasted excellent bass performance and surefooted rhythms. Throw in the potential for upgrades and a terrific build, and the Supernait 2 was a superb amplifier that delivered Naim's "addictive sound" for a reasonable price.

Established in 1998 by two ex-BBC engineers, Leema Acoustics quickly established itself as one of our favourite specialist hi-fi brands. This anniversary model of the amplifier that helped launch Leema encapsulated everything we love about the company's products. It looks superb and feels built to last - and the individual passport signed by the engineer who approved the product is a lovely touch. Leema keeps it analogue on the inside, preferring to suggest you add external digital components should you need them, helping no doubt to deliver that clean, punchy, powerful sound. Rich and smooth without lacking attack, the performance is precisely as impressive as you'd expect from a £5000 amplifier.

We all know PMC's excellent speakers, but don't be thinking the Cor, the company's first dedicated consumer amplifier, is entirely new territory for the company. Since 1991 PMC has been making the amps for active speakers such as the BB5s, the reference monitors found in the BBC’s Maida Vale Studios. And that experience shows. Like so many engineer side projects, this one's a doozy, so we hope PMC sticks with it. Transparency is the name of the game here, the Cor delivering a faithful, balanced, neutral sound. The Cor comes "highly recommended".