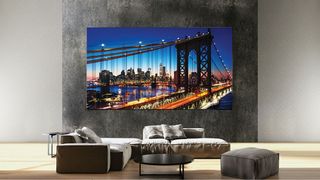 We are exceptionally spoiled when it comes to the consumer electronics available to us – arguably we have too much choice – but, as human psychology asserts, no matter how much we have and how good it is, we always want more and better. That condition is, importantly, what paves the way for continuous innovation, after all.

So, what audio and AV kit do we want to appear in this world? Naturally, we want successors to and spin-offs of the class-leading kit we already have, but we also fantasise about concepts that haven’t yet been introduced to the world.

You’ll find no fewer than 16 examples of appealing yet unannounced products on our wishlist below – some are expected to appear on the horizon, others we'll have to cross our fingers for.

And don't forget to let us know which products you want to see with a comment below!

It's only natural that a successor to our favourite pair of true wireless earbuds sits high up this wish list. The Sony WF-1000XM3s currently lead the field when it comes to premium noise-cancelling earbuds, but while Sony doesn't need to rush out an improved model right now to stay top of the class, it's likely the XM4s will make an appearance at some point. And when they do, our fingers will be crossed for aptX HD Bluetooth support and a slightly more compact case design.

KEF has won back-to-back What Hi-Fi? Awards for its all-in-one speaker system efforts – first for its LS50 Wireless standmounters and more recently for its smaller LSX standmounters. So how about a floorstander version, KEF? For those who want a room-dominating, bass-rich performance without the hassle of extra boxes and lots of trailing cables, such propositions (as we've seen from the likes of Dali) from KEF would be most welcome, given the brand's track record.

With 4K, HDR and Dolby Atmos now part and parcel of sport broadcast coverage, football has never looked or sounded so good in the home. But what if matches could be augmented into 3D hologram-style projections that you could watch on your dining room table or even true-to-size at a local stadium?

Researchers from the University of Washington have already experimented with such a concept, using AI and FIFA gameplay analysis to create 3D maps of pitches and players, and watching such reconstructions back on a domestic surface through Microsoft’s HoloLens smart glasses. So who's to say that, despite being a distant dream now, it won't take off in the future?

Another product proficient in holding a title (they've won 2018 and 2019 What Hi-Fi? Awards), the Sony WH-1000XM3 noise-cancellers are screaming out for a successor, which we'd bet our reference hi-fi system will be called the WH-1000XM4. They're perhaps the most likely on this list to arrive: their features, design and price have been heavily leaked in recent months.

It's been almost five years since the Chord Mojo redefined expectations of portable digital-to-analogue converters, and while many portable challengers have come into the marketplace since, a new Mojo hasn't.

You can't really blame Chord Electronics for that; a current Award-winner, the Mojo is still at the top of its game, and the company has recently been working on sequels and streamers for its more advanced Hugo offering. Still, that doesn't stop us wanting an update – one that doesn't run quite so hot, and one accompanied by an all-new Poly streaming accessory at that.

Four years is a long time for an AV receiver to sit on a shop shelf; most models are replaced on an annual basis, arriving each year like clockwork. You can see why Sony hasn't been in a rush to replace its STR-DN1080 budget powerhouse, though – it's still a What Hi-Fi? Award winner. That said, a successor has to be on the horizon, especially as HDMI 2.1 features are increasingly present in current receivers.

Sennheiser's most premium soundbar is 127cm wide, 14cm tall and costs over £2000/$2000 – and is probably the best-sounding soundbar we’ve ever tested. But while the Ambeo is a hugely impressive beast, we wish its rich, natural and spacious sound signature and effective Ambeo mode could be trickled down to a slightly smaller, more affordable form. You know, for those with more modest budgets and living quarters.

it's 2020 and the world feels weird enough not to make a massive deal out of a bookshelf and a lamp that can sing, so we won't dwell on the arguable absurdity of Sonos and IKEA's first collaborative efforts. Seeing as both their Symfonisk bookshelf speaker and Symfonisk lamp speaker proved pretty impressively good value for the interior design-conscious music fan, though, we'd like more please. A singing table and shower-friendly speaker would be up there for us.

The HomePod 2 is coming. We don't know when (it's been years since the first HomePod 2 rumours surfaced) and we don't know in what form – will it be a like-for-like upgrade or a smaller, cheaper HomePod Mini? – but a sequel to the original HomePod ("the best-sounding smart speaker you can buy") seems as likely as the launch of another iPhone. Face ID recognition and 3D hand gestures are rumoured features, and Apple's new spatial audio functionality seems a likely integration.

It's gone quiet in the Spotify camp regarding lossless streaming. It's been more than three years since some subscribers reported being offered access to a Spotify Hi-Fi option, and here we are today, still listening in a measly 320kbps. We'd like to see Spotify finally green-light higher quality, but the fact Amazon now offers a competitive CD-quality and hi-res option begs the question: does the world need it?

The Award-winning duo, Marantz's CD6006 UK Edition CD player and PM6006 UK Edition stereo amplifier, represent excellent entry-level options for admirers of their CD collection. They're a couple of years old, so an update (the CD6007 and PM6007, perhaps?) in the near future doesn't seem out of the question. When it comes, we hope Bluetooth is onboard the amp this time, and naturally the calibre of sonic quality we've come to expect from Marantz components across the price spectrum.

Labelled the 'Future of TV' and the heir apparent to OLED, MicroLED appears to have a bright future in home cinema. It's like OLED with its self-emissive properties, but instead of using organic light emitting diodes they use tiny, non-organic LEDs – three per pixel, which can be turned off individually and display a completely different colour to the next.

The promise is of perfect contrast, colour control and high peak brightness. The problem is its current expense. Samsung's renowned efforts lie in the huge, modular The Wall (which goes up to a 583in 8K variant), but even the smaller, framed ones are mega-money. We hope the technology becomes more accessible sooner rather than later as, from what we've seen, it looks exceptional.

Cambridge entered the true wireless earbud market at a good time. Its Melomania 1s were the truly first recommendable budget alternatives to the AirPods and Sonys, and few have challenged their supremacy since. The British brand would be hard-pushed to better the 1s for quality, but how about a stab at a premium noise-cancelling pair to muscle in on Sony, Apple and Sennheiser's dominance?

Naim's Nait 5si amplifier and Nait CD5si CD player were reliable What Hi-Fi? Award winners before they were ousted by newer competition a few years back. So it's about time the sub-£1000 battle was reinstated by their successors, especially as the pricier options in the Nait range were advanced last year, with both the Nait XS 3 and Supernait 3 receiving best-in-class Awards.

A new Nait CD spinner would hopefully feature some digital inputs, while the next-generation amplifier would undoubtedly have an upgrade path for Naim's power supply, and perhaps even a built-in phono stage.

Apple's long-speculated over-ear headphones debut is so close to fruition (or so we think) we can almost feel their cushions. The AirPods Studio, as they are expected to be called, are tipped to arrive by the end of this year, and are well-positioned to take on Sony, Sennheiser and B&W at the pricey end of the wireless noise-cancelling market. Tipsters have also predicted Apple could launch two variants: a premium model swathed in "leather-liked fabric" and sportier versions that feature "lighter, breathable material".

If at first you don't succeed, try again. And if you do, well, keep going! We hope that is British speaker brand PMC's attitude to designing amplifiers, because its first standalone domestic amp, the Cor, proved just as capable as the class leaders when it arrived a couple of years ago. Because of its proficiency, we'd be interested to see how PMC would turn out a Class A/B pre and power amplifier pairing too.

Dolby Atmos is everywhere, and that's not necessarily a good thing