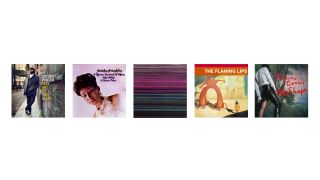 Interested in better sounding music? Of course you are.

So when you've enriched yourselves by reading our high-resolution audio: everything you need to know guide (if you haven't already), the answer to whether you want a library of hi-res music files will likely side with the one to the question above.

And, if you have a hi-res-supporting device – whether that’s a portable music player, smartphone or NAS drive and streamer combo – you'll be pleased to know you can get a pretty rich collection with just a few clicks of a computer mouse (and, ahem, a credit card).

More than a few hi-res download sites are committed to the cause, including 7digital, HDtracks, Onkyo Music, Qobuz and Technics Tracks. And having scoured the stores and tested the tracks, we’ve decided upon our favourite 15 hi-res albums available to download, from £7.49 to £19.49…

The vocal scrawling of Mike Hadreas, under his Perfume Genius moniker, presents some of the most empowering and emotionally baring battle cries in music when it comes to subjects of sexuality, self-identity and homophobia.

The critical acclaim of his third album, Too Bright, which reinforced the unflinching, melancholic directness of his previous efforts, may have put him on the map. But the follow up, No Shape, could be his most audacious and poetically candid record yet, with opening track Otherside (one of his most spectacular examples of balladry yet) sounding particularly hair-raising through a good pair of open-sounding headphones. The contrasting charge of the second track is equally arresting - but those yet to discover the album shouldn't be worried about only top-heavy brilliance here.

The follow-up to the Brooklyn-based jazz singer-songwriter’s 2013 Platinum-certified album Liquid Spirit, Take Me is an even headier, attitude-driven jazz-soul fusion. Wearing his confessional heart on its sleeve, it basks in the buttery-smooth baritone and compositional craft that’s made him such an unlikely superstar.

His tender musings in More Than A Woman and the breezy trumpet solo in Don’t Be A Fool are worth half the album’s outlay alone, and there’s plenty more – from the warm brass in the eponymous track to the gospel-rooted flare of Don’t Lose Your Steam – to take care of the rest.

As suggested by the album’s title, the solo debut from Hot Chip and 2Bear's Joe Goddard is all about connections – those within the history, and between the different genres, of the electronic indie music scene Goddard has been a mainstay in for almost two decades.

It follows a knowingly habitual direction, with jubilant, jangly rhythms and soulful vocals delivering a broadly inspired, well-rounded album of left-field pop and dancefloor grooves. Because hi-res isn't exclusive to refined classical music tastes and Sunday evenings on the sofa, you know.

As we stepped into the millennium, who’d have thought that the follow up to The Flaming Lips’ 1999 The Soft Bulletin album (which was lauded as one of the best of the decade) would actually turn out to be their career-defining, gold-certified effort.

More melodic in nature and with experimentalism as rooted in its psychedelic- and electronic-infused musicality as it is the emotive storytelling of the title character, Yoshimi Battles is consistent and expressive, with Coyne’s tenderly sung lyrics meandering between a deluge of playful basslines, fuzzy analog synths and supporting mellifluous acoustic guitars. One More Robot/Sympathy 3000-21 and Do You realize? are the standouts, and sublime production throughout makes up for the album’s transitory running time.

Film fans need about as much introduction to Hans Zimmer as budding bakers do to Mary Berry, and so shouldn’t be surprised at the familiar fare on this 12-track ‘classics’ album, which includes some of his biggest hitters from the likes of Gladiator, The Lion King and Interstellar. But it's the opening track – the Main Theme (From "The Dark Knight Rises") – that causes most reason for celebration. What are mere stirrings as Spotify streams are comparatively rapturous bellows of percussion and violent, impactful strings in its 24-bit/96kHz version.

The only album's snag: having been released in 2016, it forgoes Dunkirk and Blade Runner 2049, which are two excellent recent additions to his catalogue.

As baristas, craft brewers and part-time graphic designers from Homerton to Williamsburg cooed at the broken-promised regathering of James Murphy’s LCD Soundsystem now two years ago, there was likely as much anxiety that a pedestrian fourth album, especially following a seven-year wait, would sully somewhat the band’s indie folklore legacy.

Thankfully, American Dream was consummately one of the finest albums of last year, again coupling synth-led art rock arrangements with Murphy’s candid and often droll social commentary and tales of personal conflict. We included LCD’s This Is Happening in our list of 50 of the best albums for audiophiles last year, voicing our hopes of a follow-up worthy of being its peer: our complaints could be few.

J Hus had about as good a year as anyone in 2017. The versatile London lyricist successfully straddled hip-hop, grime, afrobeats and more to deliver an accomplished and accessible showcase of the current state of UK urban music.

While some songs shimmer with the sheen of 00s hip-hop, featuring crisp drums, smooth bass lines and big hooks, others borrow sounds from garage and grime for a more contemporary, minimal sound.

African rhythms and sounds permeate the album, helping deliver an upbeat and soulful sound sure to test your system’s timing and musicality.

While Oldfield’s semi-satisfying Return to Ommadawn (which pursued the original album's motif in his old, two-part format) was also released last year in glorious 24-bit/96kHz, his 1984 soundtrack for the eponymous British drama is still our pick.

The strings throughout Pram’s Departure, in particular, send shivers, and really benefit from the extra headroom afforded over the CD recording. But ultimately, the extra detail and dynamic discrepancy do wonders for conveying the perilous atmosphere of the entire score.

From bedroom production to, well, bedroom production for a much bigger audience. Four Tet was doing immaculately produced ‘lo-fi’ electronica before it was cool and continues to do so now his stock has risen to make him one of the most prominent UK dance music producers.

New Energy mixes the best of Kieran Hebden’s old sound - melancholic, melodic loops that creep to a lazy crescendo - with examples of his more recent dancefloor-orientated work, which up the tempo and come with a little more attack and dynamic reach.

In one of Concerto Köln’s latest recordings (recorded in 2014), the chamber ensemble expands its repertoire of classical baroque music with one of the era’s most famous pieces, performing a technically virtuosic 90-minute interpretation of Bach’s Brandenburg Concertos No. 1-6 that’s as refreshingly spirited as it is comfortably familiar.

And, if you can’t experience their period instrumental in the Cologne Opera House or Philharmonie De Paris, this 24-bit recording is next best. You'll want a system (or pair of headphones) with pinpoint soundstaging for this one.

Audiophile-wooing experimentation isn't restricted to the music on this ambient-cum-modern-classical album: "Some concerts were recorded on old portable reel-to-reel recorders, some on simple cassette tape decks… and others were more advanced multi-track recordings."

The by-product is the German composer's best work, from the opening echoic pummelling of electronica (An Aborted Beginning) to the dynamically diverse piano workout (Said and Done) and pensive keys above pattering rain (Over There, It's Raining). A fan's next line of inquiry? The Erased Tapes hi-res collections.

John Williams is getting on for 86 years old and, if his latest soundtrack to the Star Wars saga is anything to go by, still going very strong indeed.

As with the Hans Zimmer album above, we use a fair bit of John Williams' music in our testing process, and Star Wars: The Last Jedi seems destined to become another favourite. Williams is a master of his art, and the dynamism of his music, with sweeping crescendos and vast amounts of light and dark, means any system is put through its paces strenuously.

And, of course, a high-resolution download only intensifies the listening experience. You can't really go wrong here: from the familiar opening strains to the new motifs for characters, this is Williams at his imperious (or should that be rebellious?) best.

It’s probably not anyone’s favourite Tom Waits album, but this 2002 record combines all the aspects of Waits’ quirks we’ve come to know and love.

Deftly combining the soft bluesy crooning of his early years and the growling, gruff and stomping quality of Rain Dogs – it’s a bewitching balancing act that puts his idiosyncratic style and evocative lyrics to the fore. Written with wife and partner in crime Kathleen Brennan, the album (containing songs written for a play of the same name) weaves a bittersweet story such as only Waits can tell, with muted trumpets and marimbas mixed in with mournful cellos.

From the lullaby-like Alice to the wistful sweetness of Flower's Grave to the sinister Kommienezuspadt – every song lays bare the gravelly tones of his voice and an atmosphere that is at turns tender, nightmarish, whimsical and macabre.

Although it was released a fortnight shy of her 25th birthday, I Never Loved a Man the Way I Love You was Aretha Franklin’s 11th studio album. And thanks in equal measure to some tumultuous reworkings of other people’s songs, some matchless originals and the exquisite performances of Franklin and her band, it’s probably the most fully realised Aretha Franklin album. It’s certainly one that lends itself gladly to the high-resolution treatment.

All the musicians perform beautifully, inhabiting the pocket like it’s the most natural thing in the world - special mention must go to stalwart Spooner Oldham’s empathetic keyboard fills. But it’s Aretha’s inimitable vocal prowess, its stridency and vulnerability, its religious fervour and secular abandon, that makes I Never Loved a Man the Way I Love You an absolute cornerstone of popular music.

Neil Young’s seminal album, along with various others in the Canadian's colossal catalogue, may be available to stream in full fat hi-res from neilyoungarchives.com for free (until June, anyway), but this is one of history’s albums we wouldn’t mind having in our pockets for a lifetime.

And hearing the dynamic voyage of the genteel pluckings throughout The Needle and the Damage Done, and the height of the harmonica in Heart Of Gold, stand as enough reason why one of country-rock's most iconic recordings should be pocketed in glorious hi-res. Best enjoyed in barn setting with a pint bottle of Jack Daniels in hand (probably).