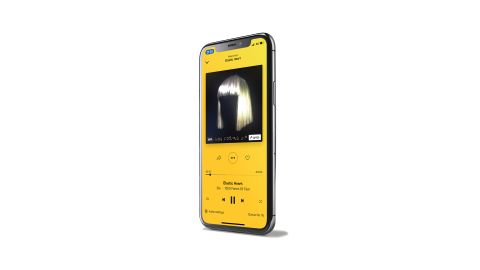 Its ambition is to be applauded, but Deezer falls between the two stools of Spotify and Tidal and struggles to justify itself over either

Deezer appears to have a bit of an identity crisis. When we first reviewed the music streaming service in 2015, it clearly saw itself as a Spotify rival, bringing a vast library of music to a mainstream audience as efficiently as possible.

By the time of our re-review, in early 2018, Deezer had begun courting the hi-fi crowd with a comprehensive catalogue of CD-quality tracks and murmurings of hi-res MQA support to come.

Yet, here we are in 2020 and hi-res is yet to appear on the platform. Instead, Deezer has hopped into bed with Sony and is offering 360 Reality Audio streaming to subscribers to its HiFi tier.

Clearly, Deezer is trying its best to differentiate itself, and that's to be applauded, but the result is that it falls short of matching Spotify's mainstream appeal and Tidal's hi-fi credentials.

These tracks are available to those who subscribe to the £19.99 per-month HiFi tier, and while you initially also needed to own one of a handful of specific devices, they can now be listened to via almost any device that supports the core Deezer experience, including phones and computers.

It once looked likely that Deezer would add hi-res streaming to its repertoire, but the company has since decided to go down the 360 Reality Audio route. Think of this as like Dolby Atmos, but specifically for streamed music, and you've got the idea.

Deezer is the only music streaming service to currently offer 360 Reality Audio. What's more, the tracks available in the format are included as part of the HiFi subscription. You will need to download a different app, called 360 by Deezer, if you want to listen to them, but this extra app also gives access to all of the non-360 tracks of the standard app so you don't have to constantly switch between the two.

The bad news is that 360 by Deezer is only available on iOS and Android devices, so 360 Reality Audio tracks can't be enjoyed on a computer or hi-fi – at least not yet.

Below Deezer HiFi there are three, more affordable, tiers. Premium (£9.99 per month) shares features with HiFi – no ads, unlimited streaming and control on mobile apps, and offline access – but limits sound quality to 320kbps.

Deezer Family (£14.99 per month) gets you everything on Premium for up to six profiles. There’s also a free, ad-supported tier with 128kbps streaming and limited mobile app use.

As well as smartphones and computers, the Deezer app is also available on many other devices: TVs from the likes of Samsung, Sony and LG; wireless speakers by Sonos, Amazon, Bluesound and Bose; and even cars via Android Auto or Apple CarPlay. And that's far from an exhaustive list.

What's more, Chromecast and AirPlay allow you to send tunes to yet more devices. Deezer might not quite match Spotify's ubiquity (it's missing from Cambridge Audio's streamers, for example), but it's close.

Regardless of the device used, subscribers can access a catalogue of over 56 million songs, more than 52 million of which it claims are in the CD-quality FLAC format. It's an impressive figure, but with all music streaming services making similarly huge claims, the numbers game is rendered a little academic.

What matters is whether the tracks you're looking for are available and, in our experience, Deezer produces the fewest blanks after Spotify. It's very rare to find a song in Spotify's catalogue that isn't also available in Deezer's – and usually in that higher-quality format.

We find Deezer stocks pretty much every track of the diverse range we search for, and all in CD quality too. Just be aware that, unlike Apple Music and Tidal, Deezer doesn’t have artist or album window ‘exclusives’, although it does occasionally release its own live sessions with big artists.

As HiFi subscribers, we mostly use the desktop and iOS mobile apps, and the ability to flick from one to the other is made easy by the fact each platform offers a similar interface.

Deezer’s appearance is perhaps best described as stripped-back – almost brutally so. The interface is clean and clear, but also a bit bare, particularly on desktop. The desktop app (and browser version) also suffers from an explicable lack of a 'back' button, so you often get stuck in musical dead ends.

Music streaming services are generally similar in layout, with a bottom playback bar and a few left-hand side tabs bordering the centralised chunk of content – and Deezer doesn’t stray too far from this template.

Since our last review, things have been slightly tweaked. 'Home' has been replaced by 'Music', although it does the same job as before: presenting users with personalised playlists as well as the opportunity to browse music by charts, new releases, popularity and various moods. Radio stations still appear at the bottom of this page, but podcasts now have their own tab, labelled 'Shows'.

'Favourites' has replaced ‘My music’, but again, the purpose is unchanged: it's a gateway to your saved playlists and ‘favourite’ tracks, albums and podcasts.

We play the What Hi-Fi? January 2020 playlist, and are pleased to hear Deezer HiFi (CD-quality) streams are clear, full-bodied and, perhaps most importantly, an upgrade from the ‘Better’ (320kbps) quality streams. It’s worth noting sound quality can be changed between ‘Compact’ (128kbps), 'Balanced' (320kbps on wi-fi and 128kbps on mobile data), and ‘Better’ (320kbps all-round) in the playback bar, while the 'High Fidelity' (1411kbps) option is accessible in the 'Custom' menu.

The HiFi streams cling more committedly to the textures of the ‘80s-style synths pulsating through GUNSHIP’s Tech Noir, and those of the horns and affected vocals that make up Hypnotic Brass Ensemble’s Now.

However, we find Tidal’s CD-quality streams a little crisper, cleaner and more precise. There’s more fuel driving Tiny Giant’s Draw Me a Line, and greater space around the instrumental and vocal accompaniment. Timing of the drumbeats and underlying cymbal rhythm is noticeably more accurate, too, with Tidal’s version of Donald Fagen’s I.G.Y. springing into life with a touch more bite.

However, listening through Grado SR325e headphones plugged into a MacBook Air, the differences are subtle. And it’s only when we up the transparency of our set-up with a Chord Hugo 2 DAC that these discrepancies become really significant, helped by Tidal's fancy options for taking exclusive control of the DAC and bypassing the MacBook's audio processing and volume control. Deezer has no such options.

Of course, the ace up Deezer's sleeve is 360 Reality Audio, which isn't offered by any other streaming service. 360 Reality Audio offers a 3D sound space by creating multiple virtual speakers and can be listened to via most standard headphones - although the experience has been optimised for Sony's range.

At its best, it's really rather impressive, immersing you in the music and surrounding you with spatially distinct instruments in a way not previously experienced. As a technological showcase it's very effective, and gives you fresh insight into some of your favourite tracks (although the selection is fairly limited at this point).

But whether the 360 version of a track will replace the stereo version in your affections is debatable. For one, even the best tracks sound comparatively lacking in punch and weight when compared to their stereo equivalents, and some other tracks just don't seem to have made the transition to 3D particularly well, coming across as rather flat and compressed in terms of detail and dynamics.

It's worth remembering that this is the very beginning for 360 Reality Audio and there's already much to like. In time it could be absolutely brilliant - it's just not a terribly persuasive reason to opt for Deezer over Tidal right now.

While we prefer Tidal’s comprehensive layout and slightly superior sound quality, the main chink in Deezer’s armour is its current lack of hi-res audio.

Deezer may still have hi-res in its sights, but all has gone quiet on that front since the announcement of its partnership with MQA back in September 2017. And until it comes as part of a competitive package, it doesn’t shine brightly enough to be the leading light in music streaming.

Its core, non-HiFi subscription, meanwhile, falls just a whisker short of Spotify when it comes to ubiquity, discovery and presentation.

But, while Deezer rather falls between the two stools of Tidal and Spotify right now, the addition of hi-res streams (and some of the hi-fi-focused features of Tidal) could actually one day see it become the best of both worlds.