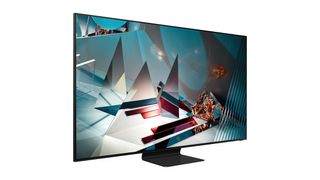 Samsung's TV lineup differentiates itself from its rivals' offerings in two ways: by opting for QLED over OLED technology for its premium TVs, and by having several 8K TVs as opposed to just one or two.

It's also arguably the biggest pusher of MicroLED, which is an ultra-premium and uber-expensive next-generation TV panel technology that could, in a few years' time, replace the TV tech currently in our homes.

Indeed, Samsung's TV catalogue is perhaps the most forward-thinking out there, even if much of the consumer world isn't ready for all of it quite yet. But 8K TV and MicroLED aside, Samsung also has its more accessible 4K QLED, 4K LCD and 'lifestyle' TV ranges. And for 2020 these promise to be better than ever – an exciting prospect considering the convincing success of the Samsung 2019 QLED TVs.

So what are these promises founded on? And should your next TV be a 2020 Samsung model? Please allow us to dive into the ranges to reveal each model and feature...

“8K demand surpassed expectations in 2019”, according to the Korean giant, so unsurprisingly the Samsung 8K TV lineup has been expanded for 2020.

While in 2019 Samsung focused on enhancing blacks and viewing angles, 2020’s efforts centre around improving brightness, contrast and details.

Samsung’s 2019 8K QLED TVs use machine learning to create a formula for upscaling content with a lower resolution than the panel – a technique adopted by other TV manufacturers – and the 2020 TVs advance the upscaling process by adding a ‘deeper’ algorithm on top. Samsung calls this Deep Learning Super Resolution.

This is a database of images with numerous layers of algorithms, each of which provides a different interpretation of the data that the TV can use to help create the most realistic upscaled picture. Deep Learning SR is a more intricate way of processing data and has been created to make upscaled content look better than ever – a key upgrade we wanted to see based on last year's TVs.

Samsung has improved the efficiency of its Full Array Local Dimming (FALD) system, too, with FALD TVs able to relocate power reserved from darker areas of the panel to the brightest areas that need it most. To this end, Samsung claims to have increased peak brightness in highlights by 20 per cent – and without increasing power consumption either.

This year's QLED 8K TVs will offer tuners with ATSC 3.0, a next-generation broadcast standard that promises support for higher resolution, more realistic audio and interactive experiences, and is designed to usher a new era of 4K (and perhaps one day 8K) over-the-air transmission TV broadcasting.

Then there's AI ScaleNet, which works to solve the inevitable problem of streaming bandwidth for 8K content by compressing content as it leaves the content provider and then restoring it after it reaches the TV – to "effectively cut in half the bandwidth needed for consumers to stream content". Samsung says it’s capable of restoring 95 per cent of an 8K image through this method, and is working with Amazon to utilise the feature for Prime Video.

Samsung is introducing active tone mapping on a per-frame basis for HDR material, too, essentially bringing dynamic mapping to HDR10 so that it works like the intrinsically dynamic HDR10+.

Meanwhile, the new Adaptive Picture+ mode can dynamically optimise the brightness and contrast of the scene playing based on the lighting of your room conditions – and this goes beyond simply tweaking brightness levels.

Sound
The sonic brethren to Adaptive Picture+ is Adaptive Sound+. It aims to improve the clarity of voices when the TV detects an increase in surrounding noise. That’s just the tip of the iceberg when it comes to new sound features for the 2020 8K TVs, though.

Samsung is ramping up its efforts to enhance sound, and to help it achieve that is a new feature called Q-Symphony. It’s a collaboration between Samsung’s 2020 QLED TVs and the Q-series soundbars that aims to produce a more immersive audio experience. Rather than the TV speakers being mute when the soundbar is connected, they will be used alongside the drivers in the soundbar.

As for the audio coming from the TV itself, the enhancement here lies with OTS+ (Object Tracking Sound), which aims better to pinpoint and ‘track’ sounds on the screen to create a more immersive soundfield through the 8K TVs' 4.2.2-channel speaker configuration. The TV achieves this by positioning a soundtrack on a horizontal plane, analysing it and then sending specific sounds to specific speakers on the TV.

Design
The Q950TS is visually the most notable TV in the lineup thanks to its zero-bezel ‘Infinity Screen’ that sees 99 per cent of its front facade dedicated to your TV-watching pleasure. Despite being a Full Array set and having eight speakers around its frame, the Q950 is only 14.9mm thick too.

A new universal guide for Samsung's 2020 TVs will combine OTT services such as Amazon Prime Video, Netflix and Freeview to display a one-stop-shop interface, organised into sections such as On Now and Continue Watching. Which services’ content will be included depends on what service metadata Samsung can pull, but we’re told by a Samsung representative that the bigger services such as Amazon and Netflix will be onboard at launch.

While the 8K TVs for this year get a next-gen processor, naturally so do the 2020 4K models. The Quantum Processor 2.0 4K harnesses next-generation AI upscaling wizardry that utilises deeper, more nuanced machine learning processing. Whereas the AI on 2019 TV's used machine learning to build algorithms in order to improve picture quality for lower-than-4K content, the new process uses numerous algorithmic layers to advance the effect. Yes, similar to how the 8K sets work.

They may be the company's most basic but they still work with the Amazon Alexa and Google Assistant voice control platforms, support Apple AirPlay 2, and are built on the Tizen smart operating system.

Thanks to their introduction in 2016, Samsung's Lifestyle TVs such as The Frame and The Serif are now household names in the company's line-up. This year both models have been improved – and they're now joined by a third model, The Sero (pictured above).

The AirPlay 2-supporting Sero is a 43in standing display that mirrors a smartphone screen, rotating for vertical or horizontal orientation. The Sero (which translates to 'vertical' in Korean) has been introduced this year following its initial 2019 launch in South Korea, and could well help Samsung achieve its 2020 goal of selling one million lifestyle TVs, supposedly triple the sales of 2019.

The Frame 4K QLED TV, which as its name suggests borders a TV screen within a picture frame that can also display art, has expanded this year to include 32in and 75in sizes, joining the existing 43in, 55in and 65in sizes. Like the regular QLEDs, the 2020 models have too been upgraded with a Dual LED system, which uses of both cooler and warmer LED around the screen, allowing the intensity of the blue spectrum to be adjusted, and thus helping to reduce light leakage, improve contrast and viewing angle.

The Serif (43in, 49 and 55in) 4K QLED TV, meanwhile, comprises a TV design in the subtle shape of a capital 'I' sat stop a pedestal-like stand.