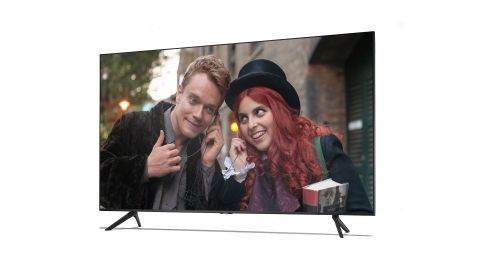 With a performance that far out-muscles anything else at this price, this TV is a real steal

Samsung's 8-series has traditionally been positioned just below the company’s glamorous range-topping QLEDs. In the past, it has proven to be the sweet spot where picture quality and price intersect to maximum effect. Enter the Samsung UN55TU8000 – not quite the pinnacle of the 8-series, but close enough for us to be excited at its arrival.

Last year, we considered the RU8000, which we reviewed at 49in, to be one of the bargains of the year, so we have high hopes for this successor. With Samsung’s Crystal Processor 4K, a stylish design, built-in voice assistant and a packed suite of apps, it certainly looks the part on paper.

There’s much to like about the Samsung TU8000’s build and features. A fourth HDMI port would be nice but, unlike other TV manufacturers, Samsung already has all the important apps, including Netflix, Amazon Prime Video, Google Play Movies & TV, BT Sport, Now TV, Apple TV and Disney+, which means there is no need for an external media streamer and effectively frees up an HDMI socket. So, you could argue that a three-socket Samsung TV is equivalent to a four-socket model from most other manufacturers right now.

(Image credit: Future / How to build a girl, Amazon Prime)

The only serious bugbear is the stand. The Samsung TU8000 sits on a pair of unhelpfully wide plastic feet and you’ll need a TV unit that’s at least 103cm wide to support it. A more central leg positioning option would have been handy.

Otherwise, this is classic Samsung. It’s a near bezel-less TV with a ‘three-sided Boundless Design’. It’s neatly finished on the rear with a fairly uniform 6cm thickness and no awkward lumps sticking out to hinder wall-mounting.

The Tizen user interface has had a few minor tweaks since the 2019 models. Not only is it stacked with apps and services, but it’s clean and easy to use. It also features Samsung’s Ambient Mode, with access to artwork, background themes and other visual niceties, all designed to turn your telly into something more stylish than a black rectangle when not in use. As ever, it’s a nice touch.

Voice control is through Bixby, as has been standard for the last few seasons, but this time, the option to choose Alexa is also built into the system (Google Assistant has been promised as a later update). Press the microphone button on the remote and ask for content genres, a specific film or channel, a change of inputs or to open an app, on top of all the standard services such as weather, news and egg timers.

While it’s all good in theory, we find TV voice control a bit hit and miss. It’s hard to beat the speed of a good remote control, and Samsung has one of the best around in the One Remote. It’s the curved, black plastic finish variety rather than the all-metal one that comes with the premium QLED range, but it works a treat.

Apart from Brightness, Contrast, Sharpness and Color, there aren’t many settings to worry about on this TV, however a couple of them are particularly significant.

Your first stop should be the Picture Clarity section, where you can set your level of motion processing. This is usually a matter of taste but we’re pleased to see that, while not the best on the block for motion, the UN55TU8000 removes much of the judder as we watch Interstellar on 4K Blu-ray. The flight of the rogue surveillance drone across the screen is easy enough on the eye without ever hitting that over-processed look.

We’d recommend toning the Contrast and Brightness down a little. They’re set to maximum out of the box, which is too strong but understandable given that there’s not a huge amount of peak brightness to this panel.

The two most significant settings, though, are the Contrast Enhancer and Samsung’s Shadow Detail, the latter of which is new for 2020. Between these two, you can get an idea of just where the mid-range compromises lie in this reasonably priced TV.

Ultimately, we end up with a choice between a subtle and nuanced, but slightly dull, picture with the Contrast Enhancer set to Low or something with more HDR impact, but a little lighter on tonal detail, when going for the High setting. Either way, the picture is involving, exciting and way beyond anything else you’ll find at this price.

To have top levels of shading and punch in the same TV is beyond the capability of most mid-range TVs – and it’s the kind of performance you’d pay a lot more for with QLED and OLED technology. The only edge-lit LED we’ve seen of late that comes close to that is the Panasonic TX-58HX800 which, at the time of writing, is almost twice the price (and isn't available in the US or Australia).

There’s also a depth of black on the Samsung that the Panasonic can't quite match. Heading into the off-world scenes of Interstellar, it’s hard to fault the blackness of space. It’s rich and almost pure without a hint of light bleed from the LED backlighting, even at the edges and corners of the screen. The blanket of stars is tightly controlled with pinpricks of individual intensities. As we sail past Saturn, the 4K detail of the moving clouds of the great gas giant are as spectacular as Christopher Nolan intended.

When we reach Dr Mann’s planet, there’s an excellent balance of light and dark areas, thanks to the HDR capabilities of this TV. The frozen rock landscape, the ice clouds and the spacesuits with pimpled textures are all delightfully produced.

The few colors in this monochromatic section pop beautifully. Whether it’s the orange trim of the spacesuits, the red bags in the shuttles or just the skin tones of the astronauts, the palette is rich and balanced. That said, it is worth taking a look at the Color Tone section. Some will prefer the Cool balance to Standard which can come across slightly tinged in more heavily graded films.

Taking a step down to SDR with The Amazing Spider-man 2 on Blu-ray, there’s a lot more for this set to get its teeth into, color-wise. Watching the Times Square scene, it’s clear this TV upscales well. The shot over the neon-lit New York streets still shows tremendous micro dimming control. The lights of windows and advertising boards don’t spill into the nearby dark and the picture remains clean.

Closer in on the action, there’s still plenty of intensity to the colors, if not quite the same subtlety as we saw at 4K. There are plenty of layers to the blue of Electro’s pulsing form, the yellow of the New York taxis is as we’d expect and the bright red and blue of Spidey’s outfit looks great against the night-time streets.

Details are occasionally a little soft, but don’t be tempted to use the image sharpener too much otherwise noise is quick to creep in. All the same, we’re pleased by what we see here and even SD footage of daytime TV’s Dickinson's Real Deal is watchable.

Stretched out onto this 55in panel, it’s obviously far from an AV treat but the picture is solid, the colors are realistic and there’s even some detail and texture to the guests’ woollen jumpers and the charismatic host’s pin-striped suit.

Last year’s Samsung LED TVs were not as gifted for sound as they were for picture performance and it’s the same balance again. There are three main audio settings to choose from – Standard, Adaptive and Amplified – and they offer increasing levels of weight, but at the expense of clarity. Ultimately, we choose the middle option, but even a budget soundbar will offer a big improvement.

Our halfway house still offers a sense of bass when Electro blasts away the police cars, but it’s achieved through fuzziness rather than any power or impact. There isn’t much of a leading edge to the sound.

The dialogue is fairly murky, too. There’s no problem hearing or understanding what’s said, but it’s like listening with a layer of material between our ears and the characters’ voices.

There’s enough of a simulation of weight for explosions, enough midrange for voices and just enough detail to get the crackle behind Electro’s words while still having the ability to push the sound around the TV far enough to give some sense of space. But, in contrast to the excellent picture, the sound of this TV is rather underwhelming.

Samsung has laid the smackdown once again with another aggressively priced TV. While the audio is only par for the course, the picture outperforms everything else we’ve seen in its class, and many above it too.

There's a TU8500 model that sits between it and the company's QLEDs, and perhaps that will be even better, but it's rather hard to imagine it - or any other TV for that matter - proving to be a bigger bargain this year than the excellent, affordable TU8000.