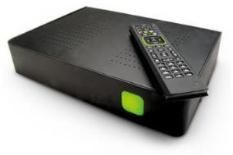 As an affordable alternative to the other players in the market, Tiscali's a great bet - but please, give us HD soon

Tiscali has been around for a while; it started as HomeChoice back in 2004, was taken over by Italian ISP Tiscali in 2006 and was recently snapped up by Carphone Warehouse, effectively pulling the firm out of financial straits.

Which is good news, as Tiscali definitely has the content and hardware to rival Sky and Virgin.

It's a triple-play bundle – TV, phone and broadband – but the service differs from its peers in that content comes down your phone line, not through a dish (Sky) or optical cable (Virgin).

Three tuners and 160GB HDD
The hub is the Tiscali+ box; a sleek black affair with a green power light that dims according to ambient light.

It packs a 160GB hard drive, and twin Freeview tuners as well as one DSL tuner – so you can watch one Freeview channel while recording another, as well as recording a DSL channel, such as Sky One.

Connections are standard fare: there's a Scart for your TV (as well as another for a VHS player), optical audio out and an HDMI. There's no HD content at the moment, but the HDMI socket is enabled anyway, and offers a clear, stable picture.

The picture quality through HDMI – whether it's TV or recorded content – is fine, with little noise or pixelation. On-demand video is more of a mixed bag, but it's still more than adequate.

Tons of video-on-demand
Content-wise, we can't fault it. As well as Freeview, you get Sky One and Two, plus (at an extra cost) Sky Movies and Sports, as well as tons of VoD from the likes of Warner and HBO.

There's also music and thousands of on-demand films. There's special content for kids to watch too, as well as a dedicated remote that allows them access to only suitable shows. A nice touch, we think.

As is the revamped EPG, which is now icon-driven and far easier to use. Our only gripes are the lack of HD content (Tiscali can't confirm when it'll be available), and a slightly noisy box.

We have high hopes for the service: all it needs is an advertising push – and, of course, that all-important HD content.