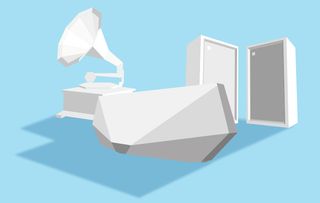 Home music reproduction has come an immensely long way in a relative short span of time, not only in terms of its quality and accessibility, but its physical design.

To mark the launch of its intelligent wireless speaker range, Music, the audio specialists at Dynaudio asked us to explore the history of the hi-fi system’s design evolution.

So join us as we take a journey through the shifting shapes and sounds of hi-fi, from its origins as a scientific curio to the sleek futuristic forms of the present day.

The beginning: sound on wax

The history of mechanical music reproduction began in 1877 with the invention of the phonograph, one of many world-changing devices developed by Thomas Edison.

For recording, sound waveforms were physically etched as grooves on rotating cylinders coated with tinfoil and later wax. For playback, the cylinder was rotated again, this time with a stylus tracing the grooves, vibrating according to their shape and reproducing a faint sound that could be amplified by a dramatically flaring horn – the classic gramophone shape with which we’re all familiar.

As the technology developed, cylinders were replaced by discs rotated by turntables and the horn by electronic amps and loudspeakers, but its basic principles – groove, stylus, amplification – have remained largely unchanged right up to the present day.

The idea of hi-fi didn’t exist in the early 20th century: home listening options were 78rpm phonographs and AM radios, neither of which reproduced sound accurately. People simply accepted that extra snap, crackle and pop was part and parcel of listening to music.

It wasn’t until after World War II that a wave of innovation – think 33rpm LP records made of low-noise vinyl, low-interference FM radio and reel-to-reel magnetic audio tape – resulted in higher quality sound becoming available to a wider home market.

Combining a radio tuner, phonograph, amplifier and speakers in a single cabinet styled to look like a piece of living room furniture, radiograms (or “consoles” in the US) offered a simple, elegant solution. They were produced in vast quantities throughout the West from the late 1940s all the way through to the 1970s, by which time smaller all-in-one systems had rendered them all but obsolete.

By buying a tailor-made system – turntable, radio tuner, pre-amplifier, power amplifier, loudspeakers and cabling components all purchased separately – listeners could create a setup to suit their room size, budget, even their preferred style of music. This approach has endured right up to today, of course, albeit with sleeker hardware, a far greater wealth of options and other components like cassette, CD, DAT and MiniDisc players, streamers and hard drives.

A burgeoning market of British-, US- and Japanese-made separates kicked into life in the 1950s, a period since dubbed the “Golden Age of Hi-Fi” by sonic historians. Records, previously monaural, became available with stereophonic sound, while imposing amplifiers like the Quad II delivered a warm, rich sonic experience, powered by the energy of softly glowing vacuum tubes.

Unfortunately, separates systems could be as frighteningly large as they were sonically impressive. Loudspeakers, in particular, could demand you give up vast tracts of floor space in return for high performance.

That’s why the introduction of “bookshelf” speakers like Acoustic Research’s iconic AR-2 in 1957 caused such a stir. Here were speakers that, despite their diminutive proportions (they were, as you may have surmised, compact enough to fit on bookshelves) sounded astonishing due to their acoustic suspension tech, which used trapped air to produce far superior bass response to many much larger cabinets.

This shift towards the small kicked up a gear in the 1970s with the arrival of music centres – the earliest form or precursor of mini or micro systems. A sophisticated take on the radiogram, these all-in-one systems were built for style and convenience over pure hi-fi performance, although the inclusion of a 12-inch turntable often meant the overall size couldn’t be too compact. The phonograph was usually accompanied by both a radio tuner and cassette deck, with speakers either integrated or designed to match.

With the rise of portable audio, the shape of our home music systems shifted along with the changing music landscape. From the turn of the millennium, many people – younger listeners especially – started to eschew physical media in favour of digital downloads and streaming, first to dedicated devices like Apple’s iPod and later to smartphones and tablets, connecting these both physically and wirelessly to compact dock and speaker systems.

While hi-fi separates endured among audiophiles and enthusiasts, the convenience and style of a simple single-box speaker that played music wirelessly from a phone was too appealing for the wider public to resist.

Which brings us right up to the present day. Dynaudio has just launched a product that defines the near future of hi-fi: Music. With four models – the Music 1, Music 3, Music 5 and Music 7 – available in four colour finishes, this intelligent wireless music system exemplifies simplicity both in its shape and in its function.

With its striking custom cloth-clad low-poly design and small footprint, a Music system will fit just about anywhere around the home. And thanks to its RoomAdapt technology, it will continually adjust and optimise its performance to suit its surroundings, no matter where you decide to place it. Its NoiseAdapt feature, meanwhile, automatically adjusts tone and volume to compensate when the ambient noise in the room gets louder or quieter.

Then there’s Music Now, an algorithm that learns your listening tastes and habits and can automatically generate a bespoke smart playlist for you at the touch of a button. Listening to what you want to hear is now as straightforward as turning on a radio.

With connectivity made to suit a variety of audio sources – Wi-Fi, TIDAL, Apple AirPlay, DLNA/UPnP, Bluetooth, USB, 3.5mm and HDMI – Music can link up to smartphones, tablets, computers, TVs, home cinema systems, and any of your hi-fi gear that has a standard stereo output. It’ll work with your kit, no matter how old it is – or what it looks like.