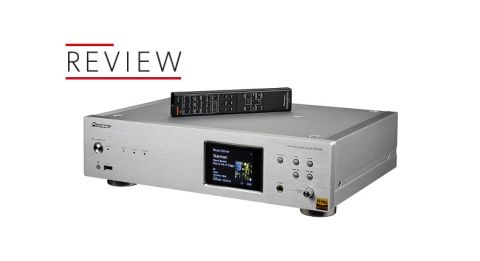 A well-specified, high-performance music streamer that ticks a lot of the streaming world’s many boxes

If today’s typical music streamer were an animal, it could well be the tardigrade. Nicknamed the water bear, and labelled “the world’s most indestructible creature”, the tardigrade can survive being boiled, frozen and crushed. And as well as being indestructible, is also highly versatile.

With the music streaming ecosystem growing at a rapid rate, streamers not only have to cater for subscribers to multiple music services, but also those with NAS drives full of hi-res music in various file formats and anyone wanting to connect other digital components to it. On top of that, they also have to sound better than the competition.

It’s been two years since we reviewed the Pioneer N-70A and, while the name of the brand’s latest flagship has barely changed, the competition has moved on significantly.

Indeed, there’s a Cambridge Audio Azur 851N–shaped ceiling for the Pioneer N-70AE to break through at the top of the market.

Everything on the Pioneer’s spec-sheet suggests it is capable of doing just that. This well-specified streamer is equipped to meet the intrinsic demands of the streaming world.

On the music service side, Tidal, Deezer and TuneIn internet radio are all accessible from Pioneer’s Remote app, while the addition of Google Chromecast support expands that accessibility to Google Play Music.

Built-in Spotify Connect gives users easy streaming of the service’s catalogue through the Spotify app. There’s also AirPlay, as well as DLNA playback of music on your network via laptop or NAS drive.

On the latter subject, it doesn’t discriminate much on file type or size - its Sabre32 Ultra32 DACs are able to handle PCM files (such as FLAC, WAV and AIFF) up to 24bit/192kHz, as well as 11.2MHz DSD files.

Through the USB type B input, PCM file support is expanded to include 32bit/384kHz.

As for other digital connections, two USB sockets (one up front, one at the rear) join coaxial and optical inputs, while outputs include a pair of RCAs and XLRs plus single coaxial and optical. A 6.3mm headphone output also sits on the front panel.

You can hardwire the Pioneer to your network via an ethernet socket, or there's built-in dual-band wi-fi support (2.4GHz/ 5GHz).

FireConnect and DTS PlayFi – wireless multi-room streaming platforms that let users access and share music with compatible components around the house – are also built into the Pioneer Remote app.

While the app doesn’t integrate Spotify (and sensibly so; few brands have managed to incorporate it well), its all-inclusive approach means it’s a go-to for everything else.

A few teething issues make app operation a little clunkier than it should be, though. When coming out of NAS folders, we’re always taken back to the top folder rather than the one we entered, and in our experience the 'song skip' function doesn’t behave quite as it should. The interface to stream Tidal isn’t half as slick as the service’s native app, either.

Still, it’s more than usable (which we can’t say for all streamer apps), and its interface looks the part.

So does the unit’s 3.5in LCD display. Even though it’s crammed with everything from source, playback and file info to album cover art, we wouldn’t have it any other way. We miss displays on streamers that don’t have them.

The artwork from Radiohead’s In Rainbows album fills the display with colour as we begin listening to Reckoner from our NAS.

However, our attention is soon stolen by the Pioneer’s sonic performance as its big-sounding, spacious and precise character becomes apparent.

When Thom Yorke’s vocal and its choral accompaniment boldly fill the space in and around, the entire presentation feels wonderfully balanced from head to toe.

The Pioneer isn’t quite as good a timekeeper as its £1400 Cambridge rival, lacking the same meticulous approach towards arranging the patchwork of percussion. Nor is it as explicit when it comes to revealing absolute detail.

And the Cambridge delivers a greater sense of distinct layering - between Cambridge and Pioneer, the level of tenderness attributed to the guitar is like the difference between a medium and a well done steak.

Such deficits are only brought to light through a comparison, though, and without one it’s hard to level criticism at the Pioneer’s sound. Even as we head over to Spotify to stream Destroyer’s Stay Lost, we are thoroughly entertained.

There’s a huge thwack to the opening drumbeats, just as much intent behind the wavering electronica underneath, and dynamic range to Dan Bejar’s vocal. There’s a dynamic ease to the acoustic version’s bare arrangement, and a sense of purpose hanging onto the vocal’s eerie echo.

As the next song, La Regle du Jeu, comes into play, the musically adept Pioneer shows it can match the album’s almost bipolar-like character, capturing the track’s French cabaret-like jollity without compromising detail or precision.

That compromise in out-and-out performance is often the fate of components that are loaded with features.

Not here, though. While the Pioneer N-70AE may not quite scale some of the heights of the pricier Cambridge Azur 851N, it’s among the most complete streamers we’ve seen at this price.