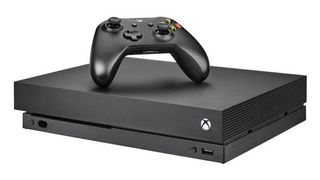 Black Friday may have come and gone, but there are still some awesome pre-Christmas deals to be had – like this one on Xbox One X bundles.

Best Buy is offering $150 off Xbox One X bundles, bringing the price down to just $350.

Not only that, you also get a free controller thrown in, saving you an extra $60. You can pick up more controllers for $40 a pop, too, which is $20 less than the usual price.

That's quite a deal. The Xbox One X is the highest-end Xbox around. Microsoft claims it's 40 percent more powerful than any other games console currently available. It also delivers 4K gaming, 4K disc playback via 4K Blu-rays, and 4K streaming from the likes of Netflix and Amazon Prime Video. And now it's cheaper than ever. Merry Christmas indeed.

Xbox One X NBA 2K20 bundle $350 at Best Buy
This bundle gets you the standard 1TB Xbox One X along with the latest basketball sim, NBA 2K20. Like the other bundle, you also get a wireless controller thrown in, one-month subscription to Xbox Live Gold and one-month Xbox Game Pass subscription. Bargain.View Deal