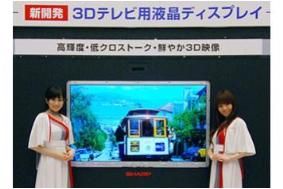 Sharp has confirmed two 3D additions to its AQUOS range of LCD TVs, expected to go on sale across Europe later this month.

The upshot of this, Sharp claims, is "a significant improvement in brightness of approximately 1.8 times greater than conventional three primary colour LCD panels, enabling users to enjoy impressive 3D images with minimal crosstalk".

Sharp is finally joining the 3D TV revolution with the announcement of its 3D-Ready Quattron TV range in Japan, as well as the world's first 3D-compatible Blu-ray recorders.

Speaking at a Japanese press conference, Sharp vice-president Masafumi Matsumoto said: "We are confident that the new technology will draw a clear line between our products and those of our competitiors."

Sharp says its plan is to have 50 per cent of its TV range 3D-Ready by the end of 2011. There are ten 3D models, four in the LV series, four in the LX series and two in the XF series, all of which use the company's proprietary QuadPixel technology. Sales start in Japan on July 30th.

In common with other TV companies, Sharp has also announced a 3D Blu-ray tie-in to promote its products: in this case the deal is with Warner Bros, and will see copies of the 3D remake of Clash of the Titans being bundled with the company's TVs.

Also in the pipeline are two Blu-ray recorders able to play back 3D Blu-ray discs and record 3D TV broadcasts. Initially they'll only be available in Japan, from July. The BD-HDW700 and BD-HDW70 have 2TB and 1TB hard drives respectively.

Earlier this year Sharp had appeared more cautious than its competitiors about joining the race to launch 3D products.

At the company's UK product launch in March, Sharp UK managing director Paul Molyneux told whathifi.com: "We're still slightly nervous about some of the issues around 3D TV. The 3D message is still not clear, and there's currently a lack of content. We haven't discounted 3D TV, and are observing developments, but for now we're concentrating on a technology that exists – Quattron."

However, Sharp is now expected to launch its 3D TV and Blu-ray range in Europe at IFA in Berlin during late August.

See our blog for details of Sharp's 2010 range