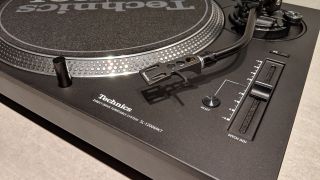 If you've been holding out for a more affordable entry in the legendary Technics DJ turntable range, it looks like you're out of luck.

Technics relaunched the SL-1200 DJ series with the MK7 SL-1200/SL-1210 at the start of the year, leaving professional and bedroom DJs salivating for a brand new pair of direct drive decks.

The Technics 1200 series has never been cheap but many fans were nevertheless left dismayed by the price. The SL-1210 MK7 is now on sale in the UK for £799, while the US model, the SL-1200 MK7, is available for $999. While that's slightly cheaper than originally feared, if you want two, that's still no small outlay. By contrast, back in 2005 we reviewed the MK5 model at a slightly more affordable £550, and there are now more price competitive alternatives.

Speaking at an event in Ibiza designed to showcase the MK7 deck ahead of next summer's club season, Frank Balzuweit, European Product Manager for Technics, said the company had already made the SL-1200 as affordable as it possibly could without unduly affecting the performance.

"Honestly, I think this is the lowest price point we can get for the moment," said Balzuweit. "We want to ensure it's got the minimum quality that it can carry the brand name Technics.

"Getting down in quality even more than that might be very very tricky, so I don't see the point at the moment where we could strip down technology, materials, weight, to even more affordable price ranges.

"We want to ensure this machine will work the same way today as it will in 20 years. Our engineers are experienced enough to see where we can strip down something or we better leave it in order not to risk the Technics brand name."

Balzuweit was open about the changes the Technics engineers made to the SL-1200/1210GR (£1299) in order to make the MK7 more affordable, from the lighter platter to the different chassis construction. It seems any further changes would be too big a sacrifice in terms of performance.

Despite the concerns of some Technics fans, Balzuweit is also adamant the MK7 remains a worthy addition to the family, capable of taking the punishment dished-out by DJs, despite the cost savings: "These machines are tortured and we have to ensure from the motor to the chassis to the tonearm, we have an excellent price performance. This is the best 1200/1210 MK that has ever been built. I'm more than sure about that. And I'm pretty sure this new turntable will set new standards in the DJ world."

It seems the response from consumers supports that, with Balzuweit claiming Technics is currently unable to keep up with demand. But perhaps the ultimate seal of approval will come from professional DJs working in the biggest clubs in the world.

To that end, superstar DJ Sven Vath - arguably the biggest name in the business that still plays vinyl - was on hand at the event to lend his support. The DJ has been using Technics for almost 40 years and is now using the MK7 turntables for his residency at Amnesia in Ibiza.

"I love the product. These are my instruments, and I trust these products a lot. Built well, very precise. I was so happy when I heard it [the new MK7]," said Vath. The biggest difference for him? "It looks even more sexy!" Well, we're not going to argue.

So what is going to be next for Technics? Balzuweit didn't give much away but suggested he'd like to see another hi-fi turntable: "There might be a model between the SL-1200G (£2999) and the SL-1500C (£899)... but even the Japanese engineers don't know anything about that, that's just in my mind!'

Do you want to see a cheaper Technics SL-1200 MK8 turntable? Or another high-end hi-fi deck? With Balzuweit having earlier revealed that an online petition gave Technics the final push to release a new turntable back in 2015, that might be one way to make it happen...

The inside story of the Ministry of Sound sound system