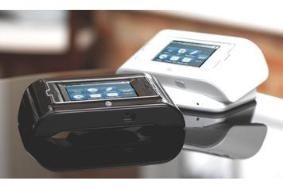 The Systemline Wireless Touchscreen is made up of three components. There's the Touchscreen itself, which is battery operated, and can be used constantly for up to four hours before a recharge.

It's available in gloss black or white, and comes with its own charging base station (in matching colour) and a Systemline wireless junction box.

Inside the Touchscreen controller is the Systemnet control software that allows it to communicate wirelessly with up to eight zone receivers.

And the wireless junction box is connected directly to zone cards in the S6 controller allowing communication from multiple wireless screens.

All Systemline products are distributed in the UK by Armour Home Electronics.