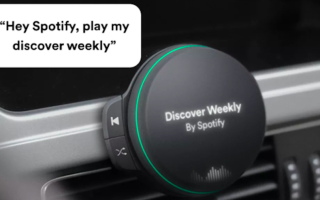 Earlier this year, Spotify posted job adverts for hardware production, engineering and operations staff, alluding to its plans to start making products. We guessed at a smart speaker to rival Apple’s HomePod, based on the news the streaming giant had been testing voice control.

But, according to The Verge, the latest crumb in the trail suggest that first product could be an in-car controller or music player, which would allow subscribers of the streaming service to control playback with their voice.

Several Spotify users have apparently reported a pop-up inside the app offering them the opportunity to pre-order a new device as part of a $12.99-per-month subscription. According to the report, the prompt only appeared once - which suggests its disclosure was accidental.

While Spotify has kept quiet on these reports, it has recently announced it will share 'some news’ on April 24th - so we may know more then. Or perhaps it’s finally launching its long-awaited lossless streaming tier.