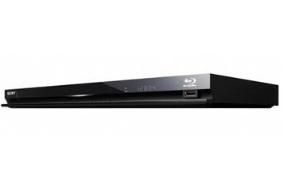 The BDP-S470 is 3D-Ready, meaning it will need a software upgrade (available in June) to become fully 3D capable.

One gigabyte of flash memory is included for storage of BD Live content, there's support for DiVX HD and MKV video formats and high-definition audio decoding onboard. Bitstream Dolby TrueHD and DTS-HD Master Audio can be sent directly to an AV amp.

The pricier BDP-S570 model has built-in wi-fi as standard and is 3D-capable straight out of the box, without the need for any software upgrade. Both models adopt Sony's new Monolithic Design concept.