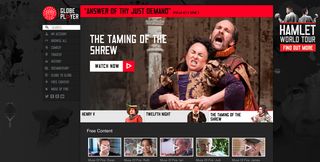 In addition to the main productions, all foreign-language productions from 2012's Globe to Globe festival and 2013's touring productions of three Henry VI plays are also now available to watch.

To rent a Globe Player production, it will cost you between £3 and £4. Meanwhile, purchases will cost between £5 and £8, with A Summer Hamlet – a feature-length documentary – costing £10.

Artistic director Dominic Dromgoole said: "Globe Player will allow us to reach brand new audiences and to make access to our productions simple and seamless for anyone with the internet."