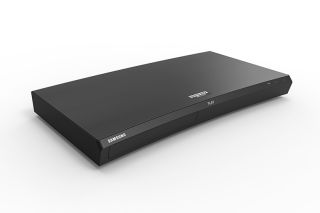 The M9500 Ultra HD Blu-ray player is joined by the MS750 soundbar and H7 wireless speaker and all feature new technologies which Samsung claims enhance performance.

On the features front, it not only now supports Bluetooth streaming - but also has a new ‘private cinema mode’ so your TV's audio can be beamed straight to a pair of Bluetooth headphones.

Intriguingly, Samsung claims the M9500 "automatically sets the TV screen and audio ... by analysing the content source being played at the time, such as HDR, Atmos or DTS:X." Whether you'll need a Samsung TV and audio system to take advantage of this feature remains to be seen.

Improved mobile integration, means users can watch Blu-rays on their smartphones, as well as view 360-degree photos and videos captured on their phone through their telly.

The M9500 is likely to face stiff competition, not least from Panasonic, LG and Sony who are also likely to launch new players at the show.

Samsung has hardly been shy in the soundbar market over the years, but the MS750 marks the company’s first model to embed subwoofer performance directly into the unit.

And, with upfiring drive units, vertical tweeters and upmixing audio processing it sounds like this new soundbar borrows design elements from its Dolby Atmos-enabled stablemate, the Samsung HW-K850.

Samsung has also designed the MS750 to easily integrate with a Samsung TV. It's compatible with the company’s Smart Remote Control so you can control both products through the one remote.

Not only that, the soundbar can connect to and be powered by your TV via a designated power cable connection. This feature certainly looks interesting on paper so we're keen to see how it works in practice.

Having recently dabbled with prism, cylindrical and egg-shaped designs with its M and R wireless speaker series, Samsung has returned to the traditional rectangular box with the H7 wireless speaker.

The H7 appears to continue the brand’s penchant for typically sleek, contemporary metal finishes, and offers, Samsung claims, an intuitive user experience thanks to a comprehensive wheel control, which doesn't only adjust volume but can also be used to select playlists from music streaming services.

Prices and release dates are yet to be confirmed, although we’ll be keeping our ears to the ground to bring you more information on all three products, as well as all the stories and stirrings from CES 2017 as it unfolds…