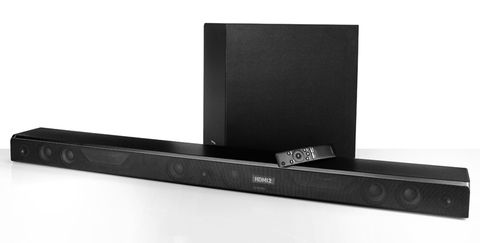 A big, bassy soundbar, but one that needs fine tuning before you let it into your living room

What do you if you want the benefits of Dolby Atmos – a truly involving and immersive sonic experience – but wrapped up in a neat package that can sit underneath your television?

Samsung believes it has the answer in its HW-K850 soundbar.

The trick up the K850's proverbial sleeve is the two 6cm up-firing drivers on the top of the soundbar.

By reflecting sound off your ceiling, it aims to give the impression that audio is coming from above and in front of you.

Running along the front of the 120cm long soundbar are nine more drivers: three 35mm tweeters on each end of the bar, and one in the middle, and six 5cm midrange drivers – these are divided into threes for the left, centre, and right channels, all driven by 360W of power amplification.

Completing the 3.1.2 channel setup is a wireless subwoofer, measuring approximately 40cm square and 20cm deep that comes as standard with the K850.

The Samsung HW-K850 has both Bluetooth and wi-fi connectivity, but to connect it to your wi-fi network you’ll have to download the Samsung MultiRoom app on your smartphone.

The app is the sole way to play Tidal, Napster, or your on-device music from your phone, although the K850 does have Spotify Connect built-in.

On the physical side, the soundbar has a couple of HDMI inputs and one HDMI output that support 4K passthrough, and an optical input – all of which are tucked away in a cutout section of the K850’s base.

There’s a micro-USB port too, but that’s only for software updates.

The soundbar’s remote looks similar to the motion-control one that comes with Samsung televisions. It’s a stylish design, that’s comfortable to hold, and we like the divide between overall volume control and subwoofer volume.

However, the buttons aren’t quite as responsive as we’d like, and the click of the button isn’t satisfying to use.

As for tonality, you can adjust the bass and treble individually, but the K850 has various audio presets too, like ‘Clear Voice’ which enhances the midrange and treble, ‘Night’ which keeps the vocals at the same volume while dynamically reducing loud sounds, as well as the ‘Standard’ mode that does not add extra processing – this is the one that we keep it on.

There’s also the option to adjust the audio sync, in 25 millisecond increments up to 175 milliseconds, if your sound doesn’t quite match the picture.

To its credit, the HW-K850 does fill our medium-sized test room with ease.

The enthusiastic subwoofer helps the low bass rumbles during the opening of Jupiter Ascending, in which futuristic guns are firing and rocket boots are taking off, feel suitably large-scale.

And the upward drivers on the soundbar do help to create a wall of sound, adding the perception of height to the soundtrack.

While it doesn’t reach high enough to really put the sound effects overhead, the K850 makes a good attempt at creating a three-dimensional space and can make sounds appear to be coming from above your television.

It also has a wide soundfield, which makes it easy to track the general movement of spaceships flying across the screen.

It doesn’t have the breadth or precision of the Yamaha YSP-5600, the other Dolby Atmos soundbar we’ve heard. But, it’s priced well short of its £1600 tag too.

This Samsung is an easy listen, with a smooth tone that doesn’t grate in the high treble or display any brittleness in the midrange vocals.

And rhythmically, it’s fairly decent – certainly enough to get your foot tapping along.

So it’s big, and it’s bassy, but unfortunately the K850 isn’t as talented in other aspects. It’s not as dynamically impressive as the similarly-priced Dali Kubik One, with the large explosions in Jupiter Ascending sounding a little flat.

During a fight scene between Caine (Channing Tatum) and the reptilian Greeghan, the whoosh of the alien’s flapping wings and the firing of Caine’s lasers need more solidity to convey the drama.

The bass needs to be tightened up as well; playing California by Grimes, and the bass beats that start the song off are a bit too slack to capture the punch of the track.

The opening thumps should have a good kick to contrast Claire Boucher’s light vocals, but the K850 hasn’t quite got its boots on.

Subtlety also leaves something to be desired, as the K850 doesn’t have enough insight in the midrange dialogue as other soundbars do.

Watching Teenage Mutant Ninja Turtles, the sense of belligerence in Megan Fox’s voice, or the hint of humour in Michaelangelo’s, isn’t as obvious, and as a result the K850 sounds a bit emotionless.

Changing to Radiohead’s Paranoid Android, and the soundbar doesn’t put across the fragility of the acoustic guitars at the beginning of the track, and the final crescendo needs a better handling on the fine details to be truly exciting.

Ultimately, the Samsung HW-K850 sits between the rock and a hard place of the Yamaha YSP-5600 and the Dali Kubik One.

If you’re set on having Dolby Atmos from a soundbar, then save your money for the more expensive, but notably more capable, Yamaha.

For those looking for just a solid soundbar, the award-winning Dali comes in at the same price point.

The K850 can deliver a huge scale sound that’s full of low-frequency force, but it’s not precise, dynamic, or subtle enough to be recommended ahead of the competition.