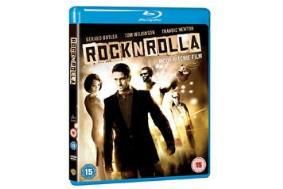 Now Ritchie is back on the scene with his latest gangster flick, RocknRolla, and it's out on Blu-ray Disc and DVD from February 2.

It's the usual Ritchie fare. Old-school London gangster Lenny Cole (Tom Wilkinson) is under threat from a wealthier foreign mob moving on to his patch with a riverfront property swindle.

A small-timer (Gerard Butler) and his crew think they can play both sides and hit the big time. Add a hard-as-ice accountant (Thandie Neman), a rocker playing dead to boost his sales and a couple of wannabe music moguls and... well you get the picture.

Those who've seen the film may well disagree with warner Home Video's description of it as "a fierce and funny caper, a smash-mouth cinematic smackdown of sex, thugs and rock'n'roll", but hey, apparently the soundtrack's pretty tasty.

Extras on the BD include a digital copy of the movie, commentary by Ritchie, deleted scenes, and video featurettes Guy's Town and Blokes, Birds and Backhanders: Inside RocknRolla.