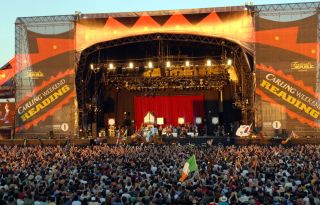 It's time to head for the campsite, but what should be on your packing checklist? Sure, you'll probably need the usual camping paraphernalia like sleeping bags and tents; some clothes for the weekend too, we'd suggest.

We're well aware you're at a festival to see your favourite acts perform, but there will be times late in the evening (or early in the morning) when you want to keep the party going. That's why we've pulled out a few must-have bits of kit to fit into your rucksack before you go.

It might seem a little bit anti-social to go to a mass gathering of music fans and then slip away into your own world by putting in the headphones, but let's face it – you'll need time out at some point. And we're well aware that sometimes, things get left behind at festivals.

That's why we've pulled together five sets of headphones that won't cost the earth – just in case...

If you're after a pair of earphones, these Sennheisers are a brilliant bargain to add to your shortlist. We tested them at £35, but we've seen them on sale for less than £20 to sweeten the deal.

We were so impressed by these buds that SoundMagic walked away with our 2013 Award for Best in-ears up to £40. They're worth much more than the £35 we tested them at.

It's another Award winner, our best portable on-ears up to £50 at our 2012 Awards. Their retro look and great sound combine to great effect, and we've spotted them for £30 at Play.com.

We might not have these buds down as the class leaders, but you know what you're getting with them. And if you shop around, you'll almost certainly find them on sale for less than £25.

Okay, so an unfamiliar brand name might not immediately persuade you but if you want some noise-cancelling cans for just £30 – that's £30 – then look no further. You'll soon be able to take a well-earned time out.

If your day is just beginning or you don't want it to end, a wireless speaker can get the party going at the back at your tent. Pair 'em up with your smartphone, tablet or other compatible device and you're good to go: these are the speakers that we reckon fit the bill best:

We'll start with the most affordable speaker on our list and a Bluetooth speaker from Sony, loaded with sonic features and sporting a classy design that makes it easy to take with you.

Up the budget scale and we soon arrive at the Product of the Year, Awards 2013. This is a fine speaker to have on you this summer, particularly with its long-lasting, fast-charging battery.

It might not sit at the uber-affordable end of the speaker market, but this is a plucky performer. It lasts 15 hours on a full charge and will even withstand the summer's inevitable rain showers.

It's an all-too-familiar scene – despite your best efforts to resist the calls of modern life (especially with a World Cup going on), internet and message use has drained your battery and now you can't call the friend who is supposed to be taking you home. If only batteries were bigger, you cry!

Fear not – there are devices out there that'll give you a fighting chance of getting through the weekend with some battery remaining, with enough left over to get the tunes pumping as well:

Superb picture, incredible sound, waterproofing and brilliant camera – all very well from the Xperia Z2, but it's batteries we're concerned about here and, thankfully, this one puts in a shift.

In its favour, this Galaxy Note has high-res music capability, good video performance and expandable storage – and a battery that drops just 11 per cent during a two-hour film, for example.

If expense isn't too much of a concern, the Apple iPad Air is a great option. It'll last a full day even if you use it to the max, which – let's face it – you're probably not going to have time to do.

Yes, the latest iteration of Sony's iconic Walkman is somewhat pricey but what you get in the NWZ-ZX1 is an impressive player that supports high-res audio and – Sony says – up to 32 hours of playback. Stamina.

The second edition of the Pure Digital One Mini has now emerged, but if it's anything like this gem, you'll be in for a treat of a DAB/FM radio. You needn't miss an episode of The Archers this summer...

From streaming your favourite music back at the tent, to stealing an hour for the latest House of Cards and following the World Cup (if you're at Glastonbury), here are our pick of the best apps to download to your device before you leave your home.

The most complete music streaming service? We think so, with the best catalogue currently on offer; a multitude of supported platforms; and some leading social features.

Watch your favourite acts, and then go back and watch them again - just in case you can spot yourself in the crowd?

We're not sure how much chance you'll get to settle back with a film or TV programme at a festival, but if you do have some time to kill, there are few services as complete as Netflix.

The 'Swiss Army Knife' of apps, this is a one-stop shop for all your festival needs. It has a navigational element, a weather function and more – you can even set a marker at your tent and it'll tell you how far you need to stagger back.

You like one act and your friends like another – you're separated and suddenly you're not able to find each other. With this app, you can locate your pals – but it does rather depend on them having the app.

You might as well come to terms with it now – it's festival season and therefore rain will be a feature of your weekend. But escape the showers with the Met Office's handy app that offers location-based forecasts.

At some point, you are going to want to get some shut-eye. But it's not going to be easy with all the goings on around you. Sleep Pillow is one of many apps that'll help you get your forty winks on the campsite.

MORE: How to watch Reading and Leeds 2014 – on TV, on radio, online and mobile