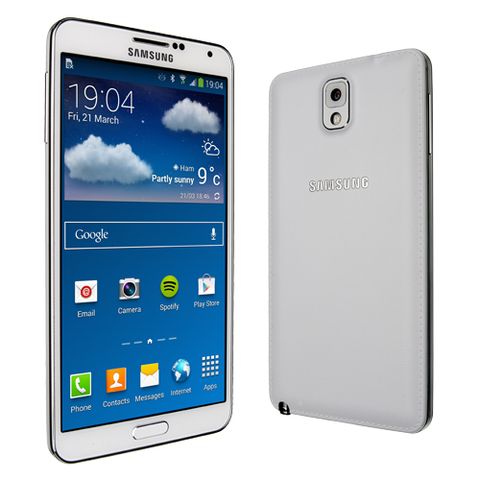 The Note is the original phablet and, despite some promising competition, in this iteration it’s still the best

Samsung’s first Galaxy Note release in 2011 was arguably the birth of the phablet phenomenon as we know it. Now three versions in, Samsung has been refining its format ever since, and it shows.

That’s not to say there aren’t things we wouldn’t change. For example, Samsung is still as married as ever to its plastic-bodied phones. While opinion on that is divided, we’re not at all won over by the leather-look plastic back panel, complete with fake plastic stitching.

That said, the textured feel is nicer than the smooth plastic back of the Note 2, so we’ll take it. However, Samsung could certainly take a leaf or two out of Nokia’s book when it comes to using plastic in a premium way.

A big part of the Note’s design has always been its S Pen stylus accessory, tucked away in the bottom right corner of the device for easy access as and when you want to use it.

How much you do use it is entirely up to you, and if you never remove the S Pen from its holder, you’ll still get along with the Note 3 just fine.

But it’s more useful than you might think, and works well for note-taking and more accurate browsing and navigating – it’ll even work with the capacitive keys at the bottom of the Note’s display.

As we’ve come to expect with Samsung phones, the Note 3 does come with a fair bit of bloatware pre-installed – something, thankfully, the company is looking to change with the forthcoming Galaxy S5.

That said, there are a number of S Pen-specific apps that do come in handy. Some of these pop up on a quick launch menu when you remove the S-Pen from the holder; others you’ll find in the app tray.

Some to mention include S Note, a fairly extensive note-taking app, and S Planner, a calendar app that allows you to add events and memos using handwriting recognition.

In fact, you can choose handwriting as your input method across the board, when writing texts or entering web addresses for example, and it’s largely accurate too.

Switching back to the regular keyboard is just a click away too, meaning you’re able to easily toggle between them should you need to.

Usability is great across the board; the 2.3GHz quadcore processor and 3GB of RAM really allowing the Note 3 to move as fast as you do.

It makes the device well suited to multitasking; we particularly enjoyed the Multi Window feature that allows you to run two apps at once, each taking up half the screen and really putting that bigger display to great use.

The Note 3 is the smallest phone in its category, with its 5.7in screen almost making it feel normal-sized next to its 6in+ competition.

Those struggling to see how they could carry such a big device around on a day-to-day basis might actually find the Note 3 an agreeable compromise between a larger screen and portability.

And that screen is a beauty too. A Super AMOLED display, it has the usual Samsung tendency for being a touch too saturated. But there’s no denying it creates a bright and impressive impression on first glance.

We did find it could be a touch fatiguing after prolonged use though, and we welcomed the screen modes, similar to a TV, that allow for some tweaking.

The ‘professional photo’ setting just takes the edge off of those overdone colours and creates a more natural look overall.

The full HD, 386ppi screen does a grand job with video, offering plenty of detail and texture giving a real sense of depth to landscapes.

Black depth and shadow detail is superb too, and whites are generally well judged without being overblown.

Colours are still on the rich side – even with the screen filter in place – but there’s no denying they create a vivid, exciting picture, if not the most natural we’ve seen.

It proved a strong contender in our battery test too, only dropping 11 per cent after a two-hour film, and lasting well during testing.

Don’t be scared by its rather proprietary battery charger either. It’s actually a microUSB 3.0 lead, which will allow for faster charging and data transfer – you can still use a 2.0 lead for a slower charge if you ever get stuck without it.

Musically, Samsung has followed in the footsteps of LG and added high-res music capabilities to the Note 3, which is great to see.

Unfortunately, we’re as unconvinced here as we are on the G Flex as to whether all the benefits of high-res music are translated as well as they should be.

There’s certainly an improvement in detail levels and dynamics compared with their MP3 equivalents, and both vocals and instruments have a better sense of texture, space and depth to them.

However, we’d like to see an improvement in its handling of rhythm and timing, which lacks the refinement found in the likes of the iPhone.

The punch is there, we just need it to follow through that little bit more.

The Note 3 packs the same 32GB as standard, but its removable back panel – ever-popular with the power users – allows for a microSD card slot and a further 64GB.

On a device like this that’s bound to be big on content, the importance of storage can’t be underplayed.

The 13MP camera on the Note 3 is a pretty strong photographic companion to carry around with you.

Its interface throws up enough options for tweakers, yet for the most part, its auto mode offers good detail, colour balance and depth of field.

That said, show the Samsung a colourful subject and it will whack the contrast up. It might not be immediately noticeable in isolation, but compared with the competition, the difference is clear.

Poorly lit situations will introduce some grain to shots, particularly those shot indoors under artificial light, but that’s the case with most smartphone cameras – the best results will be achieved in the best possible light.

The Galaxy Note family started the trend for phablets, and in many ways it is still leading the way.

The Note 3 is an accomplished handset across the board, with a screen big enough to give your videos a boost without needing a whole lot of extra space in your pocket.

If you’ve been sitting on the fence when it comes to this size of smartphone, the Galaxy Note 3 might just be the one that wins you over.