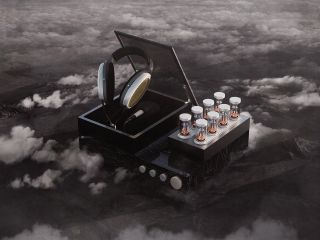 It has an amplifier housing crafted of finest Carrara marble – the type used by Michelangelo to create his sculptures. It contains 2.4-micrometre, platinum-vaporised diaphragms, which “set a new standard in perfect sound reproduction”. And the “unprecedented, ultra-wide frequency range from 8Hz to more than 100kHz” far exceeds the human auditory range – only a combination of elephant and bat would perhaps trouble it.

Sennheiser calls it the Orpheus.

The original Orpheus resembles something from a timeless slice of classic science-fiction, and its successor rises to the challenge of being similarly memorable. Two black boxes sit atop the marble slab. On activation, eight valves rise up from one box, aluminium knobs extend from the marble, and a lid slowly opens on the second box, which tilts forward to present the all-important headphones.

Cynics might consider the reveal ostentatious, and it certainly feels expensive. Moreover, though, it’s a performance – a first act before you don the headphones and delve into your music. And the Orpheus is the kind of system that could subsequently ruin you for other headphones.

Sennheiser says the Orpheus aims to create a new benchmark in excellence in the high-end audio world, defining the gold-standard of what is possible with a new phase of even higher ambition. Their idea is for the technology to fully relay captured moments, offering you a completely new kind of audio experience.

“One of the most important things that is still difficult [in recorded music] is capturing the emotion,” remarked tonmeister Gregor Zielinsky, when we interviewed him. The goal with Orpheus is for the listener to feel immersed in the sound – as close as possible to being alone with the artist.

In a sense, Orpheus is a demonstration about how technology can impact the arts. Songwriter and musician Imogen Heap said to us that “music and technology are the best dancing partners,” and Zielinsky remarked that much existing home technology is like “looking through a small slot into the music of a band”. The idea with Orpheus and other modern Sennheiser technologies, such as 9:1 immersive 3D audio, is to make the technology disappear, putting you right in front of the artist or orchestra.

The Orpheus is, of course, also a statement of intent. Axel Grell, the company’s Portfolio Manager Audiophile, notes that the original Orpheus made people think differently about Sennheiser: “At the time, headphone companies were not really recognised. But then the Orpheus was revealed. 20,000 Deutsche Marks! People wondered if we were crazy, but people lined up to listen to it at the reveal.”

25 years later, much has changed in the world of technology – and so that is another key element of this new product: a desire to stay ahead. “We are at the edge of what’s possible,” enthuses Grell, adding that the system is “really filled with electronics” (which drove engineers spare, given that they had to keep to a relatively svelte form factor).

What hasn’t changed is a desire to capture the perfect sound. “And that’s not only about measurement and engineering – it’s also about the emotion,” promises Grell. “Here, we’ve added something extra at the low-end – this is an electrostatic headphone with balls!”