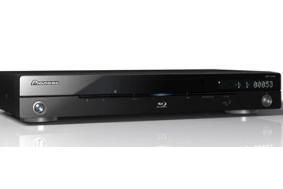 Both new models offer a choice or wired or wireless internet connectivity, BD-Live capability. YouTube and RSS feed browsing and control via a free iPhone/iPod Touch app, but they don't do 3D – for that, Pioneer says you'll have to be a little more patient.

The company says it's keeping an eye on the 3D market, but will be waiting for more software to be available before launching players.

"Pioneer will introduce two 3D models later this year when the chipsets become available from our supplier," the company says.

"Additionally, we believe 3D will come into its own when software avalability has increased, the level of understanding of the two 3D TV formats is clearer and, maybe more importantly, when consumers are financially better positioned to invest in all the necessary equipment to to receive 3D."

However, most of its range of new receivers is already HDMI 1.4a-capable, meaning it can pass through 3D video from a player to a suitable TV.

Both the top-of-the-range BDP-LX53 (£399) and the BDP-330 (£299) have onboard decoding for audio formats up to the HD versions of Dolby Digital and DTS, and can output as either raw data or Linear PCM.

In addition they use Pioneer's Precision Quartz Lock System to ensure jitterless digital audio transmission over HDMI to suitable Pioneer AV receivers. The system works by synchronising the digital clocks of player and receiver.

The players have the ability to accept 'push' firmware updates over the internet – either via the built-in Ethernet port or via an optional Pioneer wireless dongle – and when connected to a network can also be controlled by a free iControlAV app on the iPhone or iPod Touch.

The upmarket BDP-LX53 is set apart from the mainstream model by its rigid construction, using a layered chassis and drive stabiliser Pioneer calls its 'Armoured Chassis Concept'. This reduces vibration, and thus plays a part in the player's superior audio performance.

Also on the way is a matching high-end receiver, the VSX-LX53. This will replace the VSX-LX52, and builds on the strengths of the new mainstream range with a heavier, more rigid chassis and higher-quality audio parts.

The BDP-330 goes on sale next month, with the BDP-LX53 following in July.