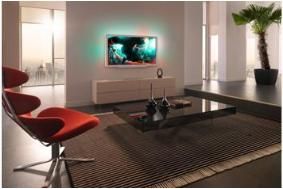 A 50in screen, the 21:9 Gold sits below the existing Platinum 21:9 set, and instead offers Philips’ passive 3D ‘Easy 3D’ technology.

Available at an ‘attractive price’ – though prices are TBC – the set also sports 2D to 3D conversion, full-screen gaming for two players (using the 3D capability), Philips’ new Smart TV portal via integrated wi-fi, USB recording and Multiview (allowing you to watch two sources at once).

SimplyShare allows you to ‘play any file your PC can play’ over your home network on your TV, while Control alludes to the new smartphone apps – on iOS and Android – that allow you to control your TV.

Net TV meanwhile is Philips’ range of internet TV applications. The likes of Twitter and Facebook are promised, though there’s no word on the confirmed catch-up TV services for the UK as yet.

We’ll be getting fully briefed on all the new TVs and features later today so follow us on Twitter for more updates and further confirmation on details and features.