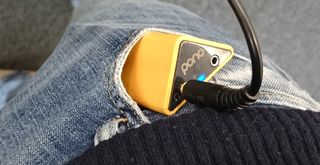 With the PonoPlayer now on sale, Neil Young's publicity campaign is stepping up a few notches. His latest interview saw Young in typically outspoken form, as he pushed once more the merits of his new high-resolution music player and high-res audio in general.

In amongst now familiar claims that the PonoPlayer "creates the best digital sound... it's the mother of all formats", he also revealed that the Pono project, which also includes a high-res download store and plans for in-car audio, has struggled to raise investment.

Asked what would be next for Pono in an interview with Vulture, a slightly presumptuous question for a product barely on the market, Young replied: "It’s anybody’s guess. We’re in uncharted territory, really... No one knows. Investors won’t invest."

And whose fault is that? Well, Apple's to an extent, according to Young.

Young also cited Apple when it came to identifying why MP3 had become the digital standard, though he was quick to praise what the company had achieved (Apple is doing rather well, lest we forget): "We got there [having MP3 as a standard] because people became really impressed with convenience and a number of features available on smartphones and on devices made by Apple. And they were pioneering devices and they were great.

"It’s fantastic what Apple’s been able to accomplish. However, it was not envisioned by Steve Jobs that MP3 was going to be a standard for music."

Of course Apple adopted the AAC format for its own digital music store, not MP3, but we get Young's general point (which we made a couple of years ago).

MORE: Young: Pono is the same as the iPod but sounds like God

Young was also unconvinced by the vinyl revival. Young said: "It’s a niche and it’s a great niche and it’s a wonderful thing and I hope people continue to enjoy vinyl and it continues to grow because it’s a good thing.

"However, a lot of people that buy vinyl today don’t realise that they’re listening to CD masters on vinyl and that’s because the record companies have figured out that people want vinyl. And they’re only making CD masters in digital, so all the new products that come out on vinyl are actually CDs on vinyl, which is really nothing but a fashion statement."

Certainly we know a hefty chunk of turntables being sold now are complete systems for around £100, such as the Crosely systems sold by Urban Outfitters. So it's easy to argue there may be an element of the "fashion statement" in some of those purchases. But we're not sure there's anything much wrong with that - and people are clearly making similar considerations when they buy headphones, smartphones and plenty of other products.

Regardless, we're sure Young is happier that people are talking about these comments than the rumours some Pono execs think high-res audio is no more than a marketing gimmick...

You can read our PonoPlayer hands-on review now - look out for our full review soon.