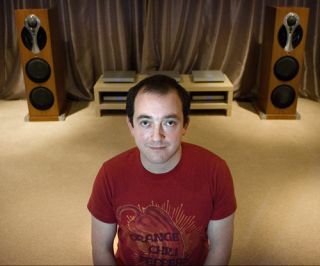 Storage is getting cheaper, and broadband faster – we really don't need the horrors of compressed music any more

Well, he would say that, wouldn’t he? The news that Linn MD Gilad Tiefenbrun (above) has suggested MP3 music files are living on borrowed time and that the future is in ‘full fat’ uncompressed downloads and playback won’t have come as any surprise to the cynics out there.

After all, Linn Records – the ‘software’ arm of the Glasgow-based hi-fi company – is one of the UK’s leading suppliers of ‘Studio Master’ audio downloads, both from its own label and those of the Universal Music Group (among others). And the hardware part of the business is now firmly focused on sales of equipment to play those downloads, such as the Akurate DSM reviewed this month.

What’s more, it was Tiefenbrun who, more than three years ago, announced that his company would no longer be making CD players and would be concentrating all its efforts on products such as the Akurate DSM.

The headline on the press release accompanying that announcement back in 2009, ‘The Death of CD?’, was widely reported as a statement, not a question, leading to something of a media frenzy that the ‘Perfect Sound Forever’ format wasn’t even going to make it beyond its third decade.

MP3: a compromise no longer needed

So are Tiefenbrun’s comments about MP3 just self-serving promotion for Linn’s players and label? I don’t think so: MP3 was always a compromise – as was, to an extent, CD – in that a flawed format was required to make a sensible amount of music available to the public in a convenient form.

In the case of CD, it was a matter of packing an hour or more of music on to a 12cm disc, meaning that for all their click-free, silent-background appeal, CDs actually sounded worse than a good LP played on top-notch equipment. In the case of MP3, it was a matter of cramming an entire library (or at least enough music to get you through the day) on to a device with – in the early days – just 32MB of internal memory.

Or about five per cent of the space taken up by an hour of music in standard 16-bit 44.1kHz PCM ‘Red Book’ quality, meaning that a player could only hold about half an hour of music at 128kb/s, and even heavier compression (or lots of juggling of memory cards) was required to store even one complete album.

In 1998, when those first MP3 players appeared, less than 15 per cent of the British population was online, and most of those were using very slow ‘dial-up’ modems with speeds in the hundreds of bytes per second.

Fast-forward 15 years, and we’re approaching 80 per cent penetration, with 76 per cent of UK households having broadband and Virgin saying that 60 per cent of all UK homes could be connected to its superfast service, offering speeds up to 120Mb/s.

The cost of storage has also fallen, notwithstanding the best efforts of natural disasters in recent years to limit production capacity: until the floods in Thailand some 18 months ago, the price per gigabyte of hard-disk storage was down to around 7p (it now sits at around 12p, as manufacturers are still building up stocks after that huge loss of production), compared to approximately £40 in 1998 when MP3 players first appeared.

So who needs quality-sapping compression to download or store an entire music collection these days? No one: even the humblest iPod nano has 2GB of storage, enough for four complete CDs at CD quality, while the long-running iPod Classic will hold over 300 ‘full fat’ albums in its 160GB of storage for £199 – and that’s why Tiefenbrun suggests we should forget the convenience of MP3 and concentrate instead on quality.

When music started to suffer

As he puts it, when MP3 appeared, ‘Suddenly the prospect of having 10,000 songs in your pocket really appealed but this required music to be chopped up and compressed into even smaller spaces. This is when the music really started to suffer. But now MP3 players have hundreds of megabytes of space, so compressing files and losing quality should no longer be an issue.

‘The music industry has been in big trouble since the dawn of MP3s – there’s no doubt that better quality, studio-performance music is what consumers will move towards.’ However, he sounds a note of caution that ‘It does require the backing of someone like Amazon or Google in order for it to compete properly with iTunes.’

Having spent a long time listening to life-sapping MP3 files and hearing demonstrations of what is lost when the compression is applied, and now enjoying a library of lossless music in CD quality and beyond, I suggest that day can’t come soon enough.

What's more, as I write this, the rumours are beginning to circulate again that Apple Is Up To Something.

No, I don’t mean the iPhone 5S or 6 or Mini or iPad Maxi or whatever: this time the gossip surrounds the iTunes service and whether it will start streaming music, and if so, whether that may be in CD quality or even beyond.

Now anything gets my vote that takes music beyond the huge retrograde step it took when it was decided we didn’t need CD quality but would settle for data-reduced hints at recording quality.

CD quality is no longer enough

But why stop at going back to where we were 30-plus years ago, when the already slightly outdated 16-bit/44.1kHz format was adopted for the CD? Shouldn’t we instead be looking to move forward, not simply reclaim the past? That would be as daft as inventing supersonic air travel and then scrapping that progress and going back to spending half a day in a metal tube to get anywhere. Oh, hang on…

Recording formats way beyond CD are already available but they take some finding, many being mainly sourced through specialist labels or outlets. Some great recordings of the past, and some brand new ones, are available in resolutions up to 24-bit/192kHz, and very magnificent they sound, as I noted a couple of months back in Gramophone on playing the 55-year-old Decca recording of Britten’s Peter Grimes anew as a 24-bit/96kHz download.

There’s a growing catalogue of these Studio Master releases available through the likes of HDTracks in the States, Linn Records in the UK, Qobuz in France and Japan’s e-Onkyo, along with labels such as Chandos, Hyperion and DG, while just as exciting are those labels making SACD-quality DSD downloads available.

These last really are the very small-scale audiophile outlets to date, but at the Munich High End Show last weekend, there was a growing buzz about the increased availability of such content, and from some larger labels.

And there’s even more to come: reviewing the Naim DAC-V1 for the June issue of Gramophone magazine, I strayed into the world of computer music playback software beyond the ubiquitous and (to date) limiting iTunes, with the players from Audirvana and Amarra, both available as free trial downloads if you fancy playing with them for a week or two.

Having long ago succumbed to the convenience – and sheer quality – available from streamed music, it was an unusual experience to be connecting my computer to the Naim and playing music at qualities at least as high as, and in some cases beyond, what I can currently stream.

Audirvana will play 24-bit/192kHz files, while Amarra (above) will go all the way up to 24-bit/384kHz, offering many times the resolution of CD. And some of the tracks I tried, actually at 352.8kHz – being a direct multiple of CD’s 44.1kHz – , were simply sensational, giving the best sound I have ever heard from my home system. I think I may have mentioned that in the Naim review!

Even better, this ultra-high resolution content can be played on a device that will slip in your pocket, and cost you just €200, as I explain here.

You can buy the files I used (they’re basically a FLAC version of the mastertapes) from 2L’s online store, and I have to say that If this resolution ever becomes widely available, it could be jaw-dropping: downloaded audio can’t just match the CD – it has the potential to go way beyond the quality we currently enjoy.

Stepping down through the resolutions from this to 192kHz, 96kHz and finally CD, I suddenly heard what Naim’s Dave Barber was alluding to in the Design Notes comments for the June Gramophone DAC-V1 review, when he mentioned the sound of the piano ‘getting more clanky’ as resolution dropped. You may not notice it when all you have to listen to is CD, but it becomes very noticeable when you’ve heard better.

Yes, I know there will be those who say 44.1kHz CD is good enough and serves the requirements of human hearing more than accurately, but to them I say: just listen with an open mind. After all, they said MP3 was good enough – and look where that got us.

The files used for this essay, and for the Naim DAC-V1 test in the June issue of Gramophone, were from Norwegian label 2L’s Hommage à Grieg set. You can download free samples in a range of resolutions up to 24-bit/352.8kHz from 2L's website.